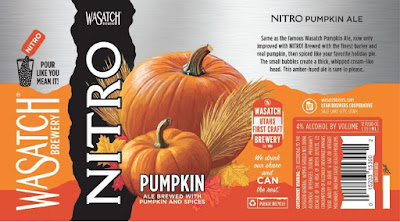 Is it too early in the year to be talking about Pumpkin beers? Most definitely. Even though this beer won't be hitting shelves 'till later in the year, it seemed worth mentioning. Wasatch Beers - who is currently transitioning to all cans, will have nitro options of their popular Pumpkin Ale in widgetless cans and nitro taps. Imagine all of the possible black and tan combos that you could come up with.

The votes are in on the tie breaker - Utah Pale Ale moves on. Now we have eight beers left. We have two IPAs, a Pale, a Schwartz, two Pilsners, a Sour IPA and a Red. Voting ends Thursday morning.