Keep Dogfish Head and Kiitos on Your Mind Today

As promised, I have info regarding the initial releases of Dogfish Head's foray into the SLC market. As of today you will begin seeing DFH beers hitting DABC shelves and specialty beer pubs. Just in case you're wonder what's available, I have that too. 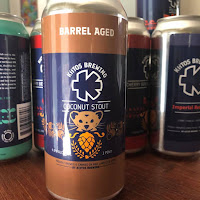 Also today, Kiitos is releasing their new Barrel Aged Coconut Stout. This version of the popular coconut stout was aged in Sugar House Distillery's bourbon barrels. This 4% beer is packaged in 16 ounce cans and should be available when Kiitos opens today. There will be release party/pinball tournament at the brewery starting at 5:30pm.

On a side note: The barrels the Kiitos used for this beer have gone back to Sugar House Distilling and have been refilled with bourbon to become part of SHD's Boilermaker Series: a special offering that features whiskey aged in barrels that previously featured local beers. Boilermaker #1 was aged in Uinta's Cockeyed Cooper barrels and Boilermaker #2 was aged in Epic's Smoked and Oaked barrels. These are great whiskies that are definitely worth picking up when their released.