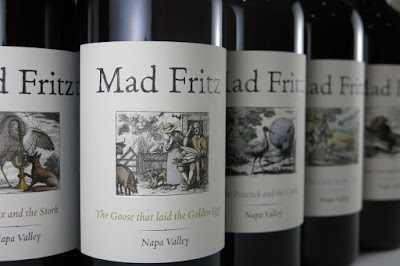 Mad Fritz Brewing out of California's Napa Valley region will be debuting their beers along the Wasatch Front and Back this week. Mad Fritz beers are made with their own house malt and ingredients found within the region of the brewery. All of the beers are barrel aged in various woods for unique flavor profiles and developmental features. The brewery touts their beers as being "not brewed to style" and all beers undergo secondary fermentation in the bottles and kegs.

I haven't had a chance to try any of these beers yet - here are some of the brewery's descriptions of what's available in Utah.

Mad Fritz The Wind and Sun - Golden Ale: Our rendition of a Belgian Strong Ale with Saison styling offers the spicy notes derived from the yeast without late hop additions. This beer is fermented in stainless steel and is aged in 3rd use French oak Chardonnay barrels for about 1 to 2 months which gives the beer a subtle vinous character and oak tones. Our Golden will age beautifully for months and potentially years to come due to its low terminal gravity that also makes it crisp, lean and deceivingly potent.

Mad Fritz The Eagle's Nest - DIPA: We opted not to dry hop as we feel there is adequate punch from the whirlpool/knock-out steep. After a warm fermentation we racked to a 3rd use Chardonnay barrel for aging for two to three weeks only.  This highly aromatic beer is bright with hops as well as subtle barrel tones and a rich yet dry texture terminating at 1.006 to 1.008 and alcohol at 8.4 to 8.8 % v/v and 85 IBUs.

Mad Fritz The Kite, Frog and Mouse Rye Ale: The generous spice and lift that Rye malt brings an aroma that is completely seductive as well as the synergy with the Ivanhoe heirloom hop this beer seems to get better and better with age. Aged in Bourbon barrels for about two weeks and is unmistakeably intense. We partnered up with The Bounty Hunter and their great source of Bourbon to make this happen. This batch will be available for a very short time although its possible a few bottles may leave the brewery and could end up in your glass.

Mad Fritz The Lion and Other Beasts - Grissette Ale: This Belgian Style ale called a Grisette that is somewhat of a lost beer style named for the coal miners wives that would serve this up after the long work day in the mines.  It is typically a low alcohol ale at 4 to 5% by volume with low bitterness and aromas of yeast-spice as well as subtle hop notes.  Our resulting beer is bright with light fruit tones, yeast spice, dry and clean. Clocks in at 5.7% v/v alcohol by volume and was aged in chardonnay barrels for one month. Our more recent bottlings have been aged in neutral French oak for 1 to 2 months with varying levels of ABV although typically landing at 5.5%.  We sometimes refer to this beer as a mini-Saison or even a Belgian Pale Ale in style.

Mad Fritz The Larks in the Corn - Blue Corn Pale Ale: The idea behind this beer is to single hop with our locally grown Cascade and have a grain bill with approximately 30% micro malted blue corn to craft a refreshing style while showcasing some of the color and flavor you get from the corn. The barrel age program is limited with another hop addition prior to racking for bottling. The result is a crowd-pleaser that parallels many milder IPAs yet offers aromatic beauty of one of the greatest hops currently cultivated.  The flavors of this beer are incredibly unique due to the layering of malted corn, cascade hops and yeast esters offering lots of stone fruit.  The color tends to be dictated by the blue corn and has a light red-blue hue to it.

Mad Fritz The Old Man and Death - Imperial Rye Stout: This Imperial Stout recipe pulls from our experience with past stouts with an added twist of rye that makes up about 14% of the grain bill. It has slightly more nutty/biscuit flavor and works well with the spicy notes from the rye and the roasted malts. We racked this beer into a French oak wine barrel for aging. This beer has it all from layered aroma profile to a fully textured palate even with a low terminal gravity of 2 Plato (1.008 SPG) and 8.1 to 8.4% v/v Alcohol

Mad Fritz The Fox and the Leopard - Dopplebock: This richly styled lager is perhaps far from a traditional Doppel Bock due to the use of  freshly emptied first use Petite Verdot French oak barrel from 2012 where it aged for another two months.  The aromas are very bold and bright showcasing the impacts of the barrel while the power of this 9.1% Alc. v/v lager pushes back both with flavor and palate texture.

Mad Fritz The Fox Grapes: We made two batches one with some variations and aged both in a combination of French Chestnut wood and a older Cabernet Sauvignon wine barrel.  After 7 months of aging we had a very dry beer (mostly due to the wild cultures of yeast and natural wine bacteria).  We did some light blending and the result is...well.. 'Wier'... The bright fruit aromas and flavors from the grapes are almost Rose' wine like yet the core of it is a beer rich smooth beer with light bitterness then dry crisp and carbonated with subtle chestnut and oak spice.  This beer continues to evolve and each year we push the amount of Petite Sirah we can get into the beer.

These beers are very "hands on" in the way their made and the price is going to reflect that. If you find them at your favorite beer nerd pub, plan on opening up a line-of-credit for them. You likely will not see them in DABC stores. If you've tried any of them, please share your experience.