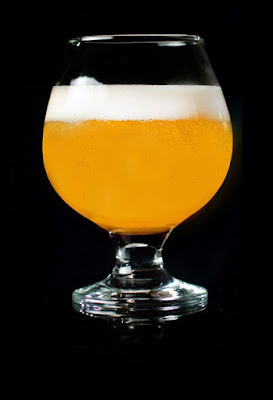 Once a year Breweries in Colorado team up to make collaborations beers for the state's big Collaboration Beer Festival. Each participating brewery makes a beer with one in state brewery and one out of state. Epic's in state partnership was with Comrade Brewing Company; while their out of state collaboration was with Orlando, Florida's Ellipsis Brewing Company. Sadly, the Comrade beer was made at Comrade and won't be available to Utah residents. However the Ellipsis beer was made at Epic's Denver brewery and a limited supply has been made available to Salt Lake City's beer nerds.

The beer is a Wheat Wine. If you're not familiar with the style: they're an American style of Barley Wine that have a high malt bill. The difference is the amount of wheat used. At least 50 percent of the ale is wheat malt, these full-bodied beers feature big bready candy flavors with a spicy/sweet finish. The Epic/Ellipsis Wheat Wine was also made with Honey, Jazmine Flowers, and Chamomile Tea. As far as hops; it was dry hopped with fruity/dank Motueka hops.

This very limited beer goes on sale today in SLC and will only be available in Epic's special Thursday growlers. I don't have to tell you that this will not last long, so don't too long. 10.1% ABV.

On a side note: The Utah Brewers Guild has an in state collaboration fest in the works. Stay close for info on this beer party coming soon.