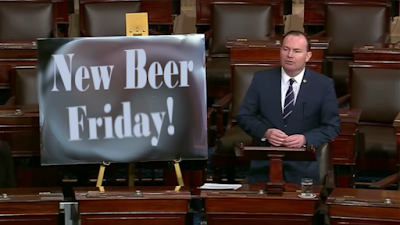 It was a cluster F of a morning! Thank Thor that it's a New Beer/Brewery Friday, that'll make it all better. Can you believe we got two breweries days apart? Life is Good! Sorry this post is so late, It was a shit morning. However, when you see how many beers there are today, you may understated my circumstance.

UTOG - Golden Grant: Aroma is light with floral hops. Toasted grain with a light malt profile. Hops are mostly floral with a bit of citrus peel. 4.0% - Available at UTOG

UTOG - Citra Pale Ale: The nose is mostly tangerine with a light malty aroma. The taste starts with a good dose of caramel malts then transitions to tangerine bitterness. The hop/malt ratio is pretty much even. Nice beer. 4.0% - Available at UTOG

UTOG - Session IPA: Somewhat similar to the Citra pale ale, with less of an emphasis on the malts and a bit more on the bitterness. The hops here are more citrus and pine like. 4.0% - Available at UTOG

UTOG - Hops Deep IPA: This high point IPA is pretty much a west coast style. Sweet malt with a good dose of pine and citrus peel. The alcohol adds a pepperiness in the back end that plays of a fairly bitter finish. 6.1%. - Available at UTOG

UTOG - Buffalo Soldier Black Rye IPA: The aroma is mostly roasted malt and pine. The taste follows, starting with a bit of char and roast. Some caramel lurks beneath with hint of spicy rye.  The hops for the most part add pine and a bit of orange zest. Finishes dry. 7.2% - Available at UTOG.

Level Crossing - American Wheat: Wheat cracker aroma. The taste is similar with white bread and biscuit. A hint of lemon comes next and the hops are very light and herbal. 4.0% - Available at Level Crossing starting Saturday

Roosters - Pink Boots IPA: Enhanced with hibiscus for color and flavor; this "cold" session IPA is citrucy with that herbal tartness from the flower. It's super drinkable and finishes slightly dry. 4.0% - This is pretty much available at any local brewery along the Wasatch Front.

Uinta - Valley Orchard: Smells like Smarties candy. Tastes like it too with biscuit and floral hops backing it up. made with cherries and raspberry (this apparently a rotating series that will have different fruits). Not their best, but I'll finish it no problem. 4.0% - Available at Uinta.

Toasted Barrel - Key Lime Gose: Lime shines with a slight toastiness. It's not too tart which keeps the competing citrus sourness-es in check.  4.0% - Available at Toasted Barrel.

Toasted Barrel - Phineas: Missed this one. It their Young Bruin with raspberry and vanilla bean. Available for tasting room only.

Shades - Kveik 8 Pina Colada: I wasn't too sure about this one, but damn it's tasty. There a decent amount of pineapple and the coconut is just round enough to cut the Kveik's yeast tartness. Super drinkable. 6.3% - Available at Shades and most better beer pubs.

Saltfire - Big in Japan: This NEIPA is super tropical and enjoyable with all of the desired implied fruit flavors. True Haze bros may not like the above normal bitterness for the style. I liked it. 7.1% - Available at Saltfire and better beer pubs.

Fisher - Slam Dunk: This pale ale is hopped with Idaho 7 And El Dorado. it has a nice citrus punch with a slight herbal bite. Yum! 4.0% - Available at Fisher.

Epic - Chasing Ghosts: This Double NEIPA is a citrus tropical bomb. If you dig high abv, low bitterness IPAs this one is right up your zip code. It's in growlers for very limited time. 10.1% - Available at Epic.

T.F. Brewing - Boston Pale Ale: This session NEIPA is a super juice box beer. little to no bitterness, it's full of mango, grapefruit and pineapple. Wonderful and sessionable. 4.0% - Available only at T.F.

2 Row - Juice Bob Omb: Missed this one. This was made with a new hopping technique. I hear good things. 6.8% - Available at 2 Row and better beer pubs.