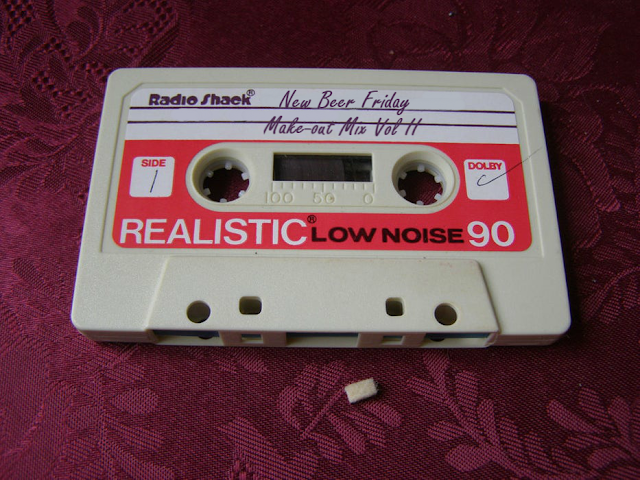 Dust off that cassette case and get out your favorite make-out tape because you're definitely going to get frisky and loose after checking out this week's New Beer Friday offerings. Yes, I know that I'm dating myself....

TF Brewing - Rye or Die: So, I’m just going to say it. This beer absolutely looks different. Rye is an oily grain; much more than barley or wheat. If you take the time you’ll notice that this beer has a different groove in appearance and flavor. This lager has fuller mouthfeel that has a hint of spicy rye rye up front. Toasty grains and herbal hops round it out; providing a clean finish. Super drinkable. This is an excellent summer lager. 4.0% - Available at TF Brewing.

TF Squirrel: This “fruity” IPA is a straight up New England style IPA that has that super turbid appearance that the fans of haze crave. The aroma is full of wonderful citrus peel qualities (mostly grapefruit). Taste wise it follows the nose pretty close with addition of orange pith, mango and pineapple. There’s very little bitterness, but what bitters I do detect come off as dry ruby red grapefruit peel. Alcohol is well hidden. Very nice. 6.5% - Available at TF Brewing starting today.

Roosters - El Doce: I missed out on this Mexican style lager. 4.0% - Available at Roosters' locations

Epic - Baptist Reserve 2019: This is a blend of all of the BBB variants that were made in 2018, the standard BBB, Baptista and Quad Barrel BBB. Look for a silky fudge brownie beer with coffee and bourbon that offers up just a tinge of cinnamon in the finish. 11.7% - Available starting today at Epic in SLC.

Epic - Pakka Berry Seltzer: Pakka is a new brand of alcoholic seltzers that are coming soon from Epic. This has a deep Rosé color and has a flavors that is full of vague berries. Like many alcoholic seltzers this is very light and dry with prickly carbonation. It was gone before I knew it. Made with real berries. Best alcoholic seltzer I’ve had. 4.5% - Limited growlers available at Epic Brewing.

Hopkins - Solstice Lager: There's a heavy amount of toast here that almost comes of as roastiness. The hops are mostly floral with some citrus peel qualities. It has a somewhat vegital finish that is somewhat dry. 4.0% - Available at Hopkins.

Wasatch Top of Main Belgian Dark Strong Ale: Missed out on this one. Look for it later today at Wasatch's Park City brewery and possible the UBC's West Side Tavern in SLC. 10.3% only 160 cases available. So... don’t “F” it up. You'll probably want to get on this one sooner than later.

Wasatch Treeline Mountain IPA: Screw New England and screw the West Coast. Wasatch is contributing to the exploding "Mountain Style IPA". Yes, I said Mountain IPA. These IPAs are more pine & berry based; reflecting the flavors of the Rockies for this new and emerging style. This IPA has medium to light body with a lighter hop profile that has notes of melon, berry and piny/resinous finish. It's super crushable and a welcome change of pace. 6.0% - Found at the UBC's West Side Tavern in SLC.

Wasatch Devastator Brandy Barrel: Boozy aroma with dark fruits. The taste follows with more brandy that transitions into chewy Christmas fruit cake and toffee. A big dose of raisin and dates hits the tongue next with cocoa and bread pudding rounding out the complex flavors. This is a wonderful barrel aged dopple bock that really is really worth checking out. 10.8% - Found at the UBC's West Side Tavern in SLC.

Don't forget that tomorrow is the Utah Brewers Guild Festival. Get your tickets online or at the gate

And in a programing note: New Beer Friday on KBER 101 is moving to 2:30pm on Fridays instead of 3:30. Check us out on the radio or online.