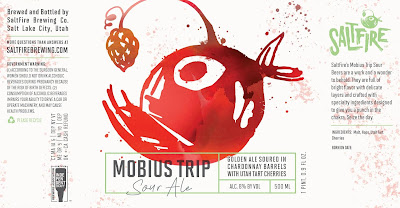 We haven't had a New Brews Soon for You in a while, This edition has a pretty interesting lot of beers that soon will be on our beer horizons, sooner than later (we hope).

Pictured above is Saltfire's Mobius Trip. This is a golden ale that is currently relaxing in Chardonnay barrels in the South salt Lake brewery's beer spa. Local cherries were also added to add extra depth to what appears to be Salfire's first barrel aged sour. Damn! my mouth is watering just talking about it. That artwork is badass as well, I need that on a t-shirt. This beer will finish at a respectable 8.0%. Stay Tuned.

Second on our beer preview is Red Rock's Otto. This will be an American style Imperial Pilsner. It will dial in at 7.0% and feature a hop profile that will scream 'American Hops'. Look for a sweet malt character with tropical fruits and citrus in stead of the traditional grassy and herbal hop profile. Look for it down the road in Red Rock's 500 ml. bottles. Sounds tasty!

between the West Coast style, New England style and the Session Style. I imagine that Treeline is the beer that Wasatch hopes will bring together all of the IPA factions into one shining 12 ounce can. My previous experiences with Wasatch's latest IPAs tell me that this will be a complex IPA for sure and I'm definitely on board with the lower 6.0% ABV.  Yes!

Finally on our preview tour is a farewell beer from Kiitos, dedicated to Real Salt Lake's Nick Rimando. This is Rimando's final season in the MLS and Kiitos is sending him into his farewell season with this special Rimondo's pale ale. This will be a 5.0% beer and it will be packaged in Kiitos' 500 ml. cans. As Real's season is already underway, I imagine that it won't be too long before we start seeing this pale ale on the shelves at Kiitos. Rimndo previously made a witbier with Epic Brewing a few years back, I guess Rimando and craft beer is a timeless combination.

Remember these are previews of what's coming to Utah's beer market and are not on sale yet. When they are, we'll get you the info you'll need. Stay close for more new brews that will be coming soon for you.

Images found at shipcomplient.com
Posted by Mikey at 4:21 AM