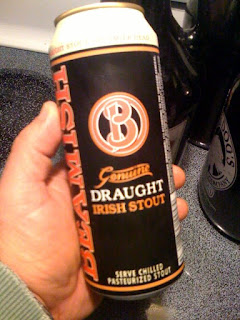 Back in early '06 Beamish & Crawford makers of Beamish Irish Stout quietly decided to pull the plug on Beamish exports to America. The company apparently wanted to concentrate on their Newcastle brand which was experiencing record growth in the states. Well it didn't last too long and after a near three year hiatus, Beamish is back bitches!

So what's the big deal? We already have Guinness and Murphy's in town, why do we need another? Well, there aren't many real Irish Stouts available around town. Most of the Guinness consumed in the states is made domestically. Murphy's Irish Stout, is made in Ireland, but is now owned by Heineken. That leaves us with Beamish. Irish owned and imported.

If you've never tried Beamish I'm confident you'll like it as much as or better than Guinness and Murphy's. Pours a very dark brownish black with a thin half-finger of creamy, tan nitro foam. The nose is of roasted malt and dark chocolate. The taste starts like the nose with roasted malt and dark chocolate. Light caramel and toffee come next. The end is slightly sweetness with a dry tobacco bitterness in the finish. The mouth feel is super creamy and smooth, but a little on the thin side. Drink ability is excellent! The nitro makes it feel fluffy and light.

The one drawback that Beamish has is it's ABV. Because of Utah law, anything over 4.0% ABV has to be sold in Utah liquor stores and can not be served on tap. Beamish comes in at 4.1%. That's right. A whole "0.1%" is keeping us from enjoying this on draft! Unfukanbaleevable!!!
Posted by Mikey at 5:23 AM

I always preferred Beamish over Guinness. Not a bad beer at all.

I would like to give it a try. It is always fun to try local beers when I travel. I think that Utah's limit on draft beer is gay. If you don't want to drink it, don't drink!

Oh this excites me. I remember the day Beamish disappeared from The Bayou and it was a sad day.