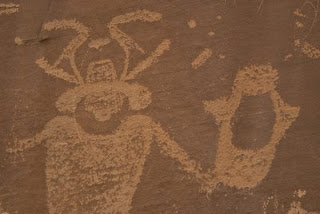 A piece of rock art found in the deserts of Utah uncovered a prehistoric Fremont Indian rock art panel that conclusively shows a warrior or sports celebrity in the act of endorsing a container, probably beer.
The panel was found by subsistence journalist Steve Howe, while scouting off-trail hikes for Project Backyard, a self-assigned mapping effort of nearby adventures.
The 50- by 10-foot series of drawings was pecked into the Navajo sandstone sometime between 700 and 1400 A.D. by Fremont Indians, a more nomadic - and artistic- culture than the contemporary Anasazi who neighbored them to the south. The panel includes four anthropomorphic figures, the largest one with headdress and bottle, and three smaller, more ephemeral figures that have heads and limbs, but no bodies. Howe theorizes that the three smaller figures are cheerleaders whose painted-on clothing has washed off with time.
The image not only depicts beer as a universal beverage, but that it predates the anti-beer pioneers that took over the land.
If you want a sense of what beer like this may have tasted like try Dogfish Head's Theobroma. This beer is a recreation of a central American recipe for the earliest chocolate drink in existence, consumed by the Aztecs. While this Utah drink probably consisted of mostly corn, it does provide a great insight to how varied beer can be to cultures. Salud!
Posted by Mikey at 5:44 AM

That's proof enough for me. So lets start implementing my vision of a brewpub in each town, a pretzel for each beer, and no liquors laws except those which facilitate good drinking.