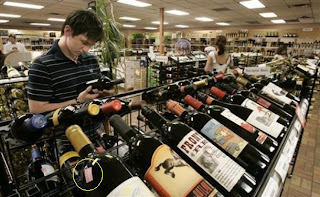 Look at the photo above... Every bottle of Suds, Hooch and Jesus-Juice up there has one thing in common. They all have that really cool D.A.B.C. sticker. This is how our overlords know that we've paid our tithe... errr taxes on the adult beverages that we drink.
The sticker system is quite the pain in the ass for state employees who have to (by hand) apply said stickers to millions of bottles annually. At a recent trip to the DABC warehouse is SLC I happened to show up at the beginning of a "tagging party". Barbara Love the manager of the Immense warehouse said that they had just received dozens of pallets Stella Artois for the Sundance Film festival. She and the crew would be pulling an all-nighter to get the boxes off the pallets, open the boxes, mark the bottles; Then re-box, re-stack and send them out. Sounds like a great use of resources to me, considering the legislature is looking to shave costs anyway they can.
Barbara told me that there was proposed legislation this year to get rid of the damn stickers (I'm paraphrasing). Considering the state is in such a budget crunch it sounds like a no-brainer to me. But no-brainers aren't exactly common on Capitol Hill. I've been looking but can't find the proposed legislation. If you've heard-of or seen it, send us a link! Cheers!
Posted by Mikey at 5:20 AM

The last location of the bill is the Senate Rules Committee.