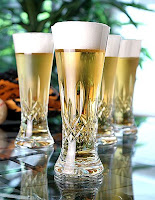 In 1842 the world was changed forever. The citizens of Pilsen in the Czech Republic not only built a new brewery but also hired Josef Groll, a Bavarian brewer to brew an experimental beer using bottom fermenting yeast. Groll had been experimenting a long time with new recipes for bottom-fermented beer and on the 5th of October 1842, Groll produced the first batch of Urquell beer, which was characterized by the use of soft Bohemian water, very pale malt, and Saaz hops.

The Beer industry in the United States was basically built on this beer. Due to it's drinkablity and it's longer storage life. Today, nearly 90 percent of the worlds beer is a variation of this original golden beer,
making pilsner most popular beer style in the world.

The Floor Malted Bohemian Pilsner malt from Weyermann(R) is actually Hand Crafted in the last floor malting facility in the Czech Republic. It is produced from Tolar and Hanka barley varieties which have their genetic roots in Hanna barley, which was the variety used by Josef Groll to brew the first Pilser Urquell in 1842. The malting process used to produce this malt is very labor intensive and traditional and produces as an authentic "old" malt as you can find today.

So between the malt used and the mashing, brewing and fermentation method, it's as authentic of the Original Czech Pilsner from 1842 as they can recreate. Bohemian's 1842 Pilsner, should be more bitter and have more hop aroma than their normal Pilsner. It will ferment and lager for about 5-6 weeks and should be available around the 15th of May. Prost!
Posted by Mikey at 5:53 AM

Dude, this sounds delicious. This is the one Geoff was helping with right? Awesome.

Yeah, Geoff is the malt master for this brew.

Hey Mikey, thanks for the write up on this. Hopefully it will come out well. Prost!
Geoff

Sweet! Spent a couple of weeks in the Czech Rep. a few years ago. Got completely addicted to the Czech style pils. Malty, hoppy golden goodness. Can't wait to try it!

As an aside, heard a rumor of a new brewpub opening on Main St. The Beer Hive? Anybody know anything about it?

Hey Rip, the Beerhive House will be opening on Main Street in SLC around the first of July. They're waiting for the private club law to expire before opening. It's not a brewpub, it's a craft beer bar. Similar to the Bayou, with less of an empasis on food. I'll post more info on it the closer it gets to opening. Cheers!

Cool...thanks for the info Mikey. Looking forward to checking it out. I tell ya', with all the new beers coming to the state, no more private clubs, legal home brewing and now a new beer themed pub...Utah is almost seeming normal. Who would have thunk it.

Your a God Bobby! Thanks for the update.

This beer was awesome! So clean, crisp and flavorful. Dangerous stuff. I wish it was a regular.