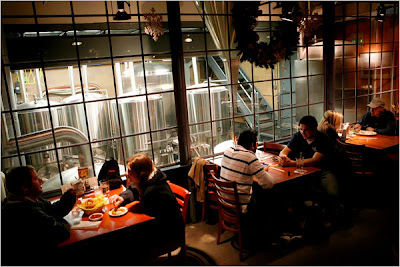 There's a positive trend right now in the craft brewing industry where brewers get together from various cities and towns to collaborate on beers, just to try and make them better. De Struise/Allagash, AleSmith/Mikkeller/Stone. There are too many to mention.

Now comes word that our own Kevin Templin From RedRock will be working on a collaboration beer with Chris McCombs of New Belgium Brewery. The beer is scheduled to be made today at RedRock. Coincidentally, Kevin was voted by readers of the City Weekly as Utah's Best Brewer today. Congrats Kevin!

Anyway, I don't have a lot of info on what style of beer they're making. What I do know is that the beer will be called Paardebloem (Flemish for dandelion) and will be made with no hops. Instead Dandelions and other herbs or spices will be used for bittering. Sounds pretty cutting edge... or old-school depending on your perspective.

Kevin will travel to Fort Collins next to New Belgium's place to assist on the creation of the brew there. Obviously this will be a special brew, no word yet on when it will be ready.

Also, in other RedRock news. Part of this years batch of Rêve: Belgian Style Triple will be poured over Utah cherries and re-fermented for one year before it's release early next year. Yum!

It's looking to be a good year for RedRock. Cheers!

Good news all around. The New Belgium/Red Rock venture sounds great, I can only hope that the product will find its way into Utah. Also, putting the Reve on cherries is a very good idea, it suits such a treatment well I think. I'm looking forward to trying both.

Dougie, It's being made in Utah. Did you get an early beer start today?

Why would a rock star brewer like kevin Templin Want to go brew with big brother I thought all red rocks beers were brewed with no compromises. I smell something else in the making. Cheers on best brewer in Salt Lake City man!

w00t, w00t and double w00t! Still reeling from the new belgium/ rodenbach collaboration, and now our very own little red rock?
Fan-damn-tastic.
I won't be able to sleep ....

Mikey, no not drinking yet, but I'm always suspicious, that way I'm happy when I get to have one!

"Not exactly a light weight "
Damn how many titles is this brewer going to put under his belt!
Kick ass utah brewers represent!
Congrats Kevin

I want me some of that dandelion beer...