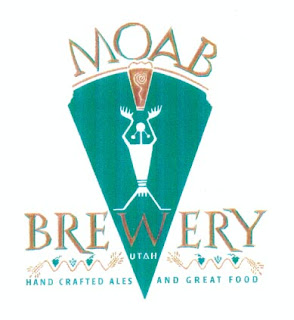 Sometimes breweries and brewpubs outside of the Wasatch Front tend to get overlooked in beer news. Well here's some good news for all regarding Moab Brewing.

Looks like our brothers and sisters in the desert are joining the high ABV revolution that's been going on in the state.

Within the next few weeks Moab Brewing will introduce two brand new ales, their first high ABV beers ever. The first is a Belgian style Triple and the second is a Black Imperial IPA. Black IPA's are the new, hot style around the country. Mixing the roastiness of porters with the leafiness of IPA's. You wouldn't think the two styles wouldn't meld very well together, but ohhh man they do! Trust me I had my fill of them this weekend. It'll be nice to have a local beer riding the crest of this trend earlier than later.

RedRock has one on tap right now that's quite tasty, go check it out.

I'm still gathering info, no word yet on where they'll be sold (brewpub or Liquor stores), or their names. But I do know that they are in the states distribution system.

Also new to liquor stores Full Sail Brewing's Keelhauler Scottish Ale. Should be available any day now. More to come. Cheers!
Posted by Mikey at 4:41 AM

Although I'm still not sold on the name "Black India Pale Ale" ;)

Oh man. Wait, defibrillator please. OK, I'm back. So which one is at Red Rock and did anyone have it? Awesome news.

I had RedRock's Black IPA. Yummy!

Oh, so Red Rock has a new Black IPA as well? I'm slow.

They have a black IPA on tap? Isn't it impossible to have any kind of IPA on tap in Utah? If it's on tap in Utah, it's not really an IPA.
Any word on whether the high ABV Moab beers are brewed and bottled in Moab or if they are brewed from their new contract brewery (whoever that ended up being)? I am guessing the latter.