Wasatch's Summer seasonals are now available. They were scheduled to be released separately, but luckily for us, we got a spring double-wammy. Both Twilight and Summerbrau were released earlier this week. 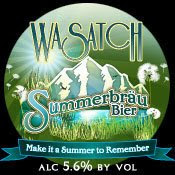 Twilight is a 4.0% Kolsch that should be available at most grocery stores.
Summerbrau is a 5.6% copper-hued Czech-style pilsner that can be purchased right now at the Utah Brewers Coop and should be at state liquor stores shortly. I hear really good things about the Summerbrau. It's feeling warmer already. Prost!
Posted by Mikey at 4:38 AM

They are both really good beers. I favored the twilight. Good work Wasatch!

I'm looking forward to both.