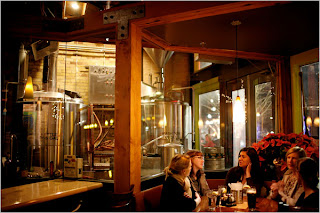 Local Breweries and brewpubs have been kicking it in to overdrive as of late trying to fulfill the publics desire for big beers. It seems like everyone has at least two or three good selling high ABV beers out right now. And if they don't, they soon will.

It looks like Squatters has three new big beers on the horizon this year. The first to be released will be Hell's Keep. Yeah I know, Hell's Keep was released a few months ago. But that was for consumption at the brewpub only. Apparently it was quite popular, because now it's destined to be sold on liquor store shelves within the next couple of months. Wahoo!

Next comes word that Jenny and Jason will be brewing up a high ABV version of the brewpubs flagship beer Emigration Amber Ale for the brewpubs 20th anniversary this September 5th. Man, I can't believe it's already been 20 years!

And finally, just because they can. It looks like Squatters will also be producing a Double IPA for unknown release date... at least to me. Sorry Doug, I know you had your heart set on an Impy Stout. There's still next year.

As long as these beers sell they'll keep making them for us. And who knows, they may become more the norm - than a novelty for Utah's beer lovers. Cheers!
Posted by Mikey at 4:25 AM

Please let us know when that double IPA is available! If it's similar to their standard IPA, but "double", it should be awesome!

Impy stout is slated for the darker, colder months. No need for condolences on that account. We'll see the IIPA sooner.

Sounds awesome. I am really happy that some of these will be for sale. I'm always trying to share beer around the world! I am getting thirsty:)

Your right Brian that IPA is damn good. The double will likely be doubly good.

Andy! Look at you, compng through with the info on the Impy Stout. Can't wait to get my paws on that.