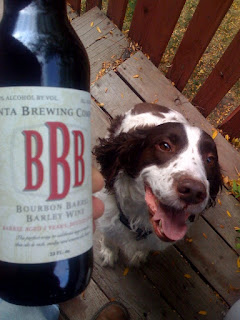 Back in '05 Uinta Brewing Company purchased a batch of spent Bourbon and Sherry barrels with the intent of experimenting with their Anniversary Barley Wine. After two years of aging in the American whiskey and sherry, the result was one of the most complex yet smooth ales ever to come from a Utah brewery. Labeled simply BBB (Bourbon Barrel Barleywine).

This time intensive effort was never intended to be released for sale. It was a special edition beer to be gifted to those in the brewing industry. If you managed to get your hands on a bottle you know that was a bloody shame. Uinta's President Steve Kuftinec told me "there is no intent to ever put BBB into production" but also said, "you never know".

Well... it looks like that which was never supposed to happen - is going to. Uinta's remaining surplus of Bourbon Barrel Barleywine is expected to be heading out to state liquor stores in the next few weeks.

Steve said "After two years in the barrels and another year and a half in the bottle, this beer is at it's peak and needs to be enjoyed now".

I have no info on exactly how many bottle are to be released, but I do know it's not many. The pricing is still being determined. BBB is expected to be in the neighborhood of around $15 per 22oz. bottle.

I've had this beer and trust me, "You want some!"

BBB Pours a dark amber/orange with a thin cap of foam. The nose was a nice perfume of Bourbon, malt and vanilla. The taste started with hazelnut and sweet malt. Next comes smooth Bourbon with dark ripe fruits; raisin and fig.The finish had a rounded, well hidden boozy mix of whiskey and pine. Cheers!