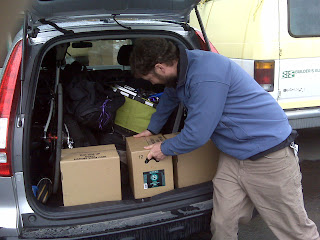 Ahhh the Interweb. It's a fine thing. Not only does it keep us in monkey-porn but it allows us to follow the subjects we love. Like beer!

The Guys at the soon to be Epic Brewery invite you to follow their progress as they begin the creation of Utah's newest brewery. From shopping for tanks, to the first beer in the bottles, it looks like we'll get a front row seat to most of the happenings as they raise Epic from the ground-up.

In the photo above it looks like Kevin is loading up the car with Ninkasi Total Domination IPA to be consumed in his hotel room. I know Kevin, and he would never-ever bring beer across the border into Utah to share with his friends (hint, hint).

Also, this just in. Bobby over at the Bohemian Brewery says that their recreation of the original 1842 Czech Pilsner will go on tap this evening. I guess I know what I'm doing tonight.
Cheers!
Posted by Mikey at 4:27 AM

I know I will be sampling this beer today. I have not tasted it since we brewed it..Prost!!

Mike, this yellow text is very hard to read in an rss feed. The black background doesn't come through the feed, but the yellow does -- but on a white background.