Deschutes & Other New Beers in Utah 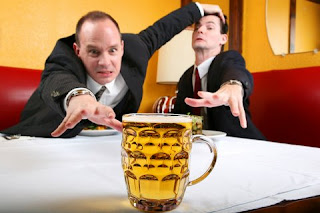 You should start seeing Deschutes Mirror Pond Pale Ale & Black Butte Porter in state stores with in the next week or so. If sales are descent we could see more of their labels in the coming months, so do your duty. But not at the expense of our local guys.

Also I'd like to thank the "Original" Andy for bringing this up. Unibroue Maudite and Rogue's Yellow Snow are listed as 50% off at the liquor stores. That's great news! However, this means that the state stores will no longer be carrying them.

Not to worry though, The Bayou - who originally brought these beers into the state to begin with, will still be selling Maudite and Yellow Snow there.

Oh this is a shame. I've fallen in love with the Yellow Snow IPA, and have been keeping it on hand. Looks like I'll need to go stock up.

Thanks for the info Mike.

Nice. Those Sam Adams beers sound nice. I like the Maudite a lot btw.

Thanks for the heads up!

Funny…I was just at a party where my friend told me Utah would never get Black Butte Porter, one of his favorites, unless the liquor stores got refrigeration. I guess I'll have to bring him some and surprise him. (Errr…unless he sees this comment.)

So, what liquor stores actually have Maudite in stock? The new wine store on 3rd West and 17th-ish (?) has the best Unibroue selection I've seen around here, but I don't recall seeing Maudite last time I was there, when I picked up some Fin du Monde. I could have missed it, though.

I was at the down town 4th South store this afternoon and didn't see any Unibroue at all.

Thanks again for all the beer-seeking tips.

I just picked up some Maudite at the 16th and 3rd Wine store. It was over by the other Unibroue stuff, but on the floor against the western wall. About 3/4 of a case left.

Also I changed my name to Andrew so I'm not confused with the original Andy.

Utah Beer. Bringing "Andy's" together one beer at a time...