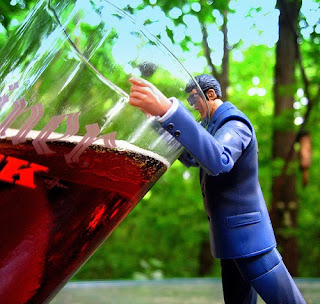 Last week it was the Belgians. This week the Dutch attack along with Michigan. Michigan? Yeah, I guess it was bound to happen. Anyway, Bayou Mark managed to score four new beers from Brouwerij De Molen and added to their portfolio of Jolly Pumpkin sours.

De Molen Rook & Vuur: Translation - Smoke & Fire. No smoke without a fire goes an old saying. The result is this perfectly balanced beer with hints of smoke and an small fire on you tongue. Style: Smoke 8.2% abv

De Molen Amarillo: This beer got it's name from the American hop, one of the best hop varieties in the world Amarillo are a powerful hop in aroma, flavour and bitterness. Not a beer to drink as a session beer but one to enjoy. Style-Imperial/Double IPA 9.2% abv

Jolly Pumpkin Maracaibo Especial: A rich brown ale inspired by the enigmatic monastic brews of Belgium, and the mysterious mist shrouded jungles of the tropics. Brewed with real cacao, and spiced with cinnamon and sweet orange peel for a sensual delight. A brew to be sipped, savored, and enjoyed!

There may be more added to this list later on in the day, so be sure to check back.

It looks like it's down to two pale ales in the Utah Beer Challenge. UPA vs. Eliphino. Watching the voting I can't say, everything was as ethical as we all would have liked but the voting was enthusiastic to say the least. Here are the brackets for the finals. They will begin on Monday morning and go 'till the end of the day Thursday.

Realize this is all for fun, but we'd still like to here your comments on the Challenge, both pros and cons.

Sweet! I was lucky enough to drink some brews at the Jolly Pumpkin in Ann Arbor in February. Excellent sour beers! Highly recommended.

I also had one of the best IPAs of my life in Michigan called Hop Slam. Hopefully we can get that in Utah some day too.

It is great to see these beers coming into the state. Jolly Pumpkin beers have been available at the state store on 3rd east for the last little while.

Thank you, Dal for catching that. It is the Maracaibo Especial. Sorry all.

Woohoo! Can't wait to give these a try.

Dallas,
Now I know why our JP orders are always shorted. Hmm.... Gonna have to bulk up our orders so that when the 3rd E. store takes them I'll have enough.