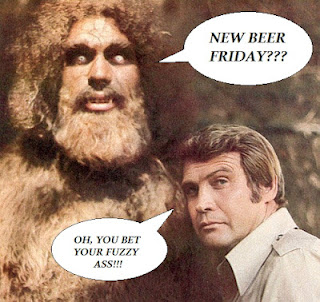 It's a "big ass" New Beer Friday! We haven't had one of the these in a while, so strap in, it may get bumpy.

Sierra Nevada's Hoptimum: Mikey wait long time for this one! Sweet caramel tones quickly give way to BIG aromas of floral, piney, and citrusy hops, hints of resin, orange, grapefruit, lemon and grass make for a BIG nose. The BIG hoppy flavors of citrus, pine, and grass all carry over onto the pallet before blending very well with a sweet caramel malty backbone, hints of alcohol linger in the finish. Hopitumum is well balanced for a staggering 100 IBU brew, and features a medium-full body and moderate levels of carbonation. BIG, BOLD, DELICIOUS! @Beerhive & Liquor stores in the coming weeks

Lagunitas Imperial Red Ale:  The nose is a tropical fruit hop bomb with rich, malts beneath. The taste is aggressively tropical-hoppy at first, but has a sweeter, maltier finish than an IPA would have. The mouthfeel is fairly heavy and well-carbonated. Overall, this is a solid hoppy red. Very, very tasty! @Beerhive

Widmer Drop Top Amber: A bit of bready malt in the nose, with some vaguely tart fruity character, accompanied by a balanced, freshly herbal hop presence. The taste has a somewhat biscuity flavor up front with some caramel sweetness. Surprisingly tart in the end, although not over the top. Hop bitterness is middle-of-the-road, with a balanced fruity and herbal flavor. Not bad. @Beerhive & Liquor stores in the coming weeks

Widmer Rotator IPA (Shaddock):  Made with grapefruit peel, it has light grapefruit in the nose with a sweet grainy malt is present. Seems rather spicy and earthy as well. The hop bitterness balances well with the lightly sweet caramel and biscuity malt. Pine, grass, and earthy hops are up front, and yet finish with a nice citrus and spicy punch. A very tasty offering. @Beerhive & Liquor stores in the coming weeks

Kona Longboard: The nose is very clean with slight notes of grain and grass. The tastes follows suit with notes of bread and grain, light herbs and a little bite of hops to even things out. Mouthfeel is pretty good and refreshing. A very nice light-bodied lager. @Beerhive & Liquor stores in the coming weeks

Kona Fire Rock Pale Ale: The nose is of bread/biscuit-like malt and some subdued hop aromas. Taste is of citrus zest and floral hops up front with a solid malt backbone. Mild bitterness on the palate after each sip. This beer has a good level of carbonation with a crisp and clean mouthfeel. Overall, this is a good pale ale with a nice balance between the malt and hops in the taste. @Beerhive & Liquor stores in the coming weeks

RedHook ESB: You may have had this in the past and thought, "this ain't so great". It's worth revisiting, a lot of the previous flaws have been fixed. The nose has faint aromas of floral/fruity hops with a little bit of toasty malts in the background. Pretty nice balance, but just not enough of either one really jump out. Caramel malts are frontrunners on the flavor. This finishes with a pretty decent bitter hop flavor. Again, this one is pretty balanced. The feel is light with good lively carbonation. Overall not bad. @Beerhive & Liquor stores in the coming weeks

Long Hammer IPA: The nose is hoppy, floral with some grassiness and lemon notes. The taste definitely has the hops come out strong. The mouthfeel is well carbonated and medium bodied and finishes with some of the grassiness and hops. Overall, not a bad IPA, and for an IPA, I would have this again. @Beerhive & Liquor stores in the coming weeks

Full Sail Phil's Existential Alt: Malty nose with some caramel notes; it's heavier on the biscuit/bread than on the caramel/sweet side. There is also a dash of earthy/noble hop character. The taste is a creamy concoction of bread and caramel, with a little bit of biscuit at the end and a balanced bitterness. More tilted to the caramel side than the aroma, I rather like the flavor. Mouthfeel is medium with a good, creamy carbonation. I like it. @ Liquor stores now

Angry Orchard Apple Ginger: I judged this at the Mountain Brewers Festival. We gave it a gold medal. Good ginger notes that don't overpower the base cider. Quite tasty and different. @ Liquor stores now

Angry Orchard Crisp Cider: We gave this one the Silver Medal. The names says it all. Crisp and dry apples. Very tasty. @ Liquor stores now

Sounds like the Craft Brew Alliance is coming to Utah in a big way. That will be a nice addition.

Super stoked to try Hoptimum. I may have to stop in at the Beerhive this weekend since I don't think I can wait for it to arrive at the local store.

That Alliance stuff has to be pretty old by now. Hasn't it been sitting in the state warehouse for a while? What takes the DABC so long to approve?! I remember last year it took them a really long time to approve Uinta's Jacked.

Actually, the Rotator IPA I had was bottled only 3 weeks ago.

I love the Hoptimium. Can't wait to get hold of some of that.