The Spice Must Flow! 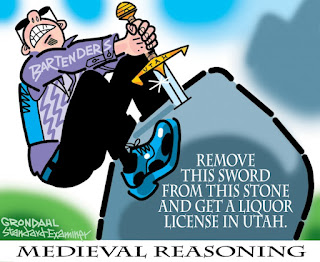 As we briefly mentioned yesterday, the Utah Legislature had gathered in a special session to do what they should have done last February, free up more liquor licenses for business that desperately need them. The bill passed.

That doesn't mean Utah is embracing economic development via liquor. Money from licensing fees will go toward more DUI blitzes and liquor enforcement, which is fine, but it's an added cost to a problem that exists within the uneducated walls of ward houses and not in reality.

The usual argument by legislators is that more liquor licenses will lead to more underage drinking and drunken driving. This is just legislators parroting the majority line, regardless of the reality; and that is, poorly written and implemented laws stifled development in the state.

It's this kind of cultural bigotry that turns otherwise intelligent conservatives into some kind of neo-Carrie Nation progressives when liquor issues come up.

So I guess state legislators are in a bit of a pickle. Stifle what their brains tell them and help prosper Utah's economic growth. Or go with their hearts and keep Utah in the 1950's forever. My guess is they'll combine both and make a mess of brilliant economic opportunities. Who needs a beer?!

source: Standard Examiner
Posted by Mikey at 8:16 AM

Ha! Not to bring politics into alcohol in Utah but I'd hardly consider Carrie Nation a progressive. She look the same attitude towards liquor during prohibition that conservatives take to, well, damn near everything but money makin'. "Do that, and I'll hit you over the head with my hatchet/religion/bible/bill."

Führer Valentine again shows that he has no interest in letting Utah's economy develop via the free market. He uses the same tired rallying cry "Think of the Children" to try and justify their antiquated liquor laws.

If he would pull his head out of his BoM and really care about children, they would fix Utah's piss poor education system and bring us from 42 worst in the US to one of the higher ranked states.

I can't wait to find out what our two steps back are going to be next year! More liquor store closings? Two forms of picture ID at nightclubs? Liquor sales taxes to fund abstinence-only education? yay, beers all around.

When the liquor license crises happened in 2010, my boss - member of the local dominant religion and now a mission president - was floored that we didn't get more licenses and said "I just thought it was a no-brainer for business." Well no shit, couldn't said it better myself.

This is good news, but I think you're right: they're going to make a complete mess of liquor laws... mostly so we imbibers have many more hoops to jump through.