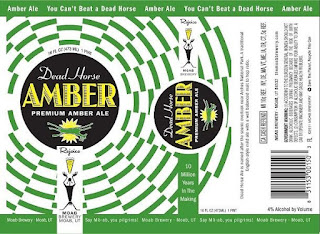 Moab Brewing Co's recent expansion and change in packaging has resulted in a phenomenal increase in sales for the small desert brewery. The new "tallboy" cans that are rolling out of Moab have been a huge hit. Part marketing - part great beer.

At the pace Johnny's IPA and Rocket Steam Beer are flying off the shelves it was inevitable that a third beer was added to the mix. Dead Horse Amber Ale has been a popular staple in Moab (and Utah) since the doors opened in 1996, and is a logical choice for the next canned beer. It's an approachable beer for non-craft beer drinkers but offers a body perfect for recreating and grilling.

Should be showing up on shelves in the next thirty days or so.

A new addition to Moab's Desert Select Series is on the horizon as well. Export Stout is said to be a full bodied stout full of roasted coffee and chocolate notes. 8.0% ABV. No release date as of yet, though it sound like it will be a perfect offering for the holidays.

I hope the brewery decides to ditch the those massive 1 liter bottles. They work fine for the Moab market, because they sell faster and are refrigerated, but those "easy cap" bottles just don't have the ability to keep the beer from spoiling as they sit dying at room temperature - liquor store shelves. That's my experience with them anyway.

I agree with you about the 1L swingtop bottles. I had some friends pick up a few bottles at the brewery a few years ago. Within a few weeks of getting home we tried them. They had no carbonation and were oxidized. There is NO way I'm going to pay $15 for another bottle that has been sitting on the shelves at the state stores.

Anyone see the Export Stout?