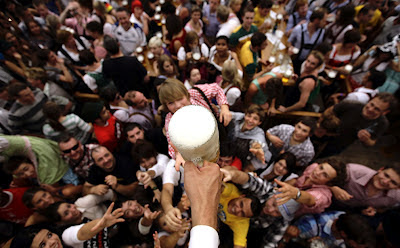 Over previous discussions about City Weekly's Utah Beer Fest we've discussed why so many have left the festival with a bad taste in their mouth, for many that bad taste did not taste like beer.... Literally, they never got to try a beer.

Long lines and a limited amount of participating breweries left many pissed of and outraged. My take has always been that this market (the Wasatch Front & Back) is much too large a market to to support a beer fest of such limited scope.

There are 1.7 million people living along the Wasatch Front alone and that's not including Summit, Morgan & Wasatch Counties. Even if 0.5% of this population base decided to show up there would be in the neighborhood of 8,500 thirsty people in attendance.  That's a lot of people for 13 breweries to handle. Compare that to the 2012 Mountain Brewers Festival in Idaho Falls. 6500+ in attendance with over 90 breweries pouring. The lines were long there, but not so long you couldn't wait for your sample.

One of many solutions discussed was get more (out of state) breweries to participate. It looks like that's about to happen.

The problem for out of state breweries, to attend was not that nobody wanted to, it was a cost thing. No brewery wants to spend the money on thousands of bottles to ship to Utah when it could save more money and resources sending kegs. Well, as we all know our antiquated liquor laws just can't handle that. Beer over 4.0% ABV absofuckinglutly may not be poured from a keg... and there's the rub.

But something strange happened, many out of state breweries found that the people of Utah like their beer, so much in fact that their sales to the state were actually kinda strong; and being the good business people they are, they want to promote their products even if it means coming down to our level.

Sorry for all the diarrhea of the keyboard that I just inflicted upon you... Here's the beer news! Sierra Nevada, Widmer, Kona, RedHook & Full Sail breweries will likely be pouring their stuff along side Utah's own breweries this Sunday.  Not only will they be pouring but Full Sail will be debuting a new "specially made for Utah" 4.0% beer called Sail Ale.

There's no denying that craft beer is big in Utah, and barring any outrage from Sen. Valentine, it looks like this is the shape of things to come. If any more breweries are added to the list we'll let you know.

Whew! That was a long way to go to say "five new breweries attending". Thanks for hanging in there.
Posted by Mikey at 3:48 AM

wondering if the out of town breweries will be participating in the VIP tasting and paring.. i forgot to ask at the volunteer orientatiion.. it will also be great to see if jenny has something coming from the craft brewers alliance :)

What is the definition of "real beer"?

The only long line at the Mountain Brewers fest was the entrance, otherwise it was really smooth sailing. Anticipating a clusterfuck here I suppose..

It's not for another five days -- and people are already pouting about it! Remind me to bring earplugs.

Forgot to mention Gordon Biersch will have some of their beers as well. Their Märzen is not too bad.

this maybe assumed but can you buy more than 5 tokens? i have not read anywhere that you can...

Yes, you can buy more than the five tokens that came with your ticket.

There was a "buy" there.