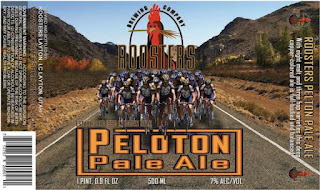 It's looking like our beer drought may be nearing an end! With the announcement of the new Vernal Brewery in addition to today's preview, Utah's beer future is looking bright.

Last April we told you about Roosters Brewing Co's plan to bottle high gravity beers, we even conducted a poll to see what container we'd prefer. The majority of readers wanted cans - they went with 500ml bottles (the next best thing IMO). Anyway here's your preview.

The first beer is Argo ESB: It will be a copper hued - malty ale, hopped with Chinook.

Next is Peloton Pale Ale: It's made with six different malts and three hop varieties. It's 7% ABV may take it into IPA territory, we'll have to wait and see.


The final beer I believe is an Amber called Niner. I don't have much info on that one yet.

Not much diversity to start with,  but I love English styles ales, so they'll work for me. There's no set release date yet, but rest assured we'll tell you when Roosters puts them in the cold case. Any thoughts?

Seasonals on tap at Roosters:

Devil's Grip Blackberry Ale
This is a brilliant-blond ale. Balanced hop and malt combination with a strong finish of fresh, sweet Blackberries.

Rude Ram Red (Layton Only)
A deep red ale with roasted, caramel flavors attributed to caramel and chocolate malts, a portion of which are added to the boil. Four hop varieties lend a spicy aroma.

I haven't been to Roosters in a long time. The bottles sound fun, and I look forward to trying them. But the main problem I have had with Roosters, and lots of us have, is with Diacetyl in their beers. I've had 15 Roosters beers at the Bayou and the 2 locations and more than half of them were buttery. Perhaps they have fixed this?

About time a local brewery made an ESB!

Hmm, I have to agree with Douglas. I can't say I have ever been a fan of their product. I do hope they have fixed their quality issues.

Michael said...
This comment has been removed by the author.
2:06 PM