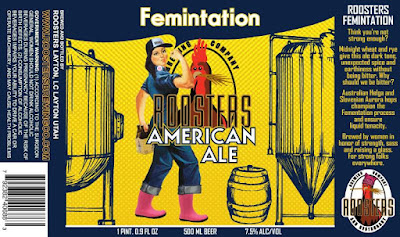 Since it's International Women's month, Ogden's Roosters Brewing Co. decided it was damn time to make a beer that celebrates women - in particular the women in Utah's beer community.

Femination American Ale was brewed by Roosters Brewer, Jacquie King Wright on International Women's Day (March 8th, 2017). Jacquie has been breathing new life into Roosters portfolio of beers, providing a feminine perspective that is definitely perceivable in the beer.

This new ale is basically an American Strong Ale that features Midnight Wheat and Rye malt, which will give Femination an earthy spiciness. Australian Helga and Slovenian Aurora hops will compliment the malts with floral, spicy and herbal notes without making it overly bitter.

Femination is set to debut sometime around the 21st of April. Look for more great things to come from Utah's feminine inspired brews.

Note: The Epic/Telluride Collaboration beer, Blizzard Conditions WILL NOT be released at the SLC brewery this morning. It apparently wasn't delivered as scheduled. Instead, Galloway Porter will be in growlers today. Galloway is being DQ'd, so if your a fan? i'd stock up. You may not see it for a while. Again sorry for the bad info on the N.E.IPA.

Lastly, voting is still underway in the Final Four Round of the Utah Beer Challenge's High Point Competition. Encourage anyone that gives a shit about local suds to participate!

Image found at Shipcomplient.com
Posted by Mikey at 4:21 AM