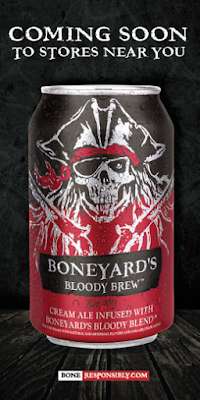 The maker of one of Utah's most popular locally made bloody marry mix has teamed up with Idaho's Laughing Dog Brewing Company to produce a chelada beer that's worth checking out. Boneyard's Bloody Blend has been making their special bloody marry blend since 2012. It's a spicy and savory tomato based concoction that the manufacturer recommends you enhance with Clamato and vodka.

For the Bloody Blend none of that is required. Laughing Dog has provided their cream ale as a base for this bloody beer which has a nice opaque tomato red color and an aroma of tomato and a hint of pepper and vinegar. The taste is primarily dill pickle juice, garlic, tomatoes, salt, vinegar and a hint of beer.

This a primo breakfast or hangover drink. Bloody beers are also a nice change of pace when you want a beer but "don't want a beer". I urge you to put your beer geek attitudes aside and check this 4% ABV bloody marry meets beer concoction out as it will be hitting grocery and C-stores around the area in the coming days.