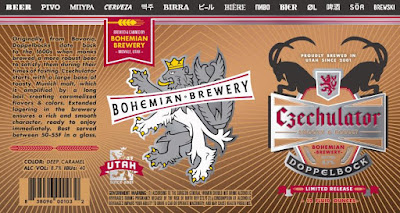 It's beer preview time again or "beerview" if you will. First up we have new packaging for a beer that definitely gets the award for most clever name. Bohemian's Czechulator. This beer originally hit back in December of 2016 and it's due once again for it annual appearance. The nose is nutty, chocolate, clean notes of malty sweetness. Some toffee and caramel in there as well. The flavor starts off similarly with some notes of traditional chocolatey, nutty, and toffee malts. As the flavor develops on the palate, though, I get some berry sweetness towards the end. The ABV on this beer is getting a boost this time around, look for a new 8.7% (up from 7.6%) lager when it hits shelves in the coming weeks. 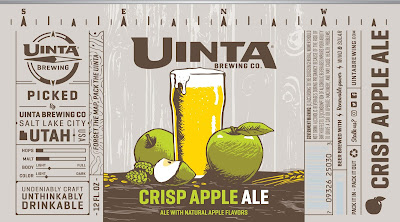 Next up is a brand new offering from Uinta Brewing. Crisp Apple Ale pretty much nails it with the name. It looks like it will have a tart dry apple flavor and will come in 12oz cans. There's no ABV listed so it may or may not be at 4% ABV. I have no idea when this will be released, so stay close.

Labels found at Shipcomplient.com
Posted by Mikey at 6:45 AM

I always knew you were from the future Mike! Way back in 2018, huh? You just tipped your hand.