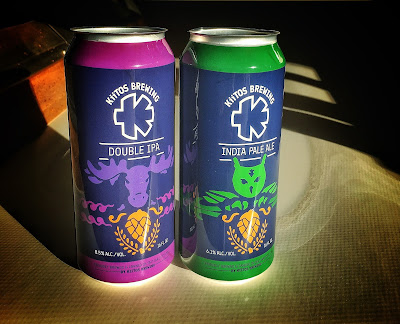 Kiitos Brewing Company would like to announce the opening of their new taproom and beer shop. Beginning tomorrow (Friday, December 2) The taproom located at 608 w. 700 s. in Salt Lake City, will open with 10 beers on tap, including: EPA - Chinook, EPA - Mosaic, Blackberry Sour, Coconut Stout, Holiday Ale, Blonde Ale, Amber Ale, Pale Ale and Coffee Cream Ale. Kiitos will also offer up a guest tap, that will be announced later.

Also, Kiitos will be introducing two new high point IPAs. Called Simply; India Pale Ale and Double IPA. These will dial in at 6.1% and 8.5% respectively. They will also be packaged in 16 ounce cans. For the time being, these are only available to take home and not for on premises drinking. The Tap room is scheduled to open at 11am.

What a great way to start December!

I like the packaging, and the three beers they've had in the grocery stores are pretty good. I'm looking forward to trying their larger selection on draft. Thanks for the news, Mikey.