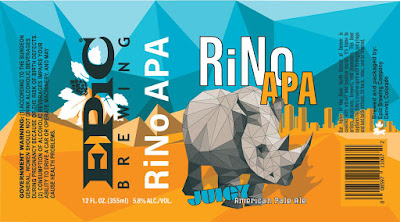 Not to be outdone, there are a couple more breweries with new suds on the horizon to make your tongues squeal with excitement.

First off: we have this new American Pale Ale coming from Epic. The RiNo APA is Epic's latest pale ale in their portfolio. The term RiNo (River North) pays homage to the bustling neighborhood that Epic's Denver brewery calls home. Epic was one of the first businesses to take a chance on this old industrial part of town, it's now one of the hottest districts in Denver. RiNo APA is described as a "juicy' pale ale that will come in around 5.8% ABV. This beer will take over from the discontinued Element 29 Pale Ale that left us too soon. More info to come.

Another new to beer (coming to store shelves that is) is RPM Brewing Company's P1 Pilsner. The P1 name comes from the racing acronym for being first - pole position qualifier or race finisher - designated as P1. Like its namesake this beer goes down fast and utilizes premium fuels. You can catch a taste of the P1 right now at The Garage Grill (RPM's restaurant) located at 1122 e. Draper Parkway, Draper. As soon as their cans hit store shelves I'll fill you in. Look for more RPM cans in the near future.

Labels found at Shipcomplient.com
Posted by Mikey at 5:11 AM

Had this when it was in their full strength growlers about a month ago. Great tasting beer!