The Best Utah Beers You Probably Never Had

When we talk beer here, I generally try to limit the topics to local beers and breweries or to suds available to Utahans. Which isn't always easy. I get it. Utah isn't exactly a "beertopia".

Sometimes it's tough having such a narrow topic, but I'm constantly surprised about who much there is to talk about. Plus it does no good when we're constantly being put down by word-of-mouth, from people who wouldn't know a good beer from their own asses. Because we get such a bad-rap about our local suds, I feel occasional reminders are needed to dispel the myths.
Many people from outside of the Zion Curtain are frankly just stunned by the fact that we actually have beer here. And the notion that the beer we have is actually tasty; is just beyond their comprehension. So I decided to throw out three of Utah greatest accomplishments in the art of brewing. Unfortunately, unless your a beer-geek-gnerd-snob-dweeb or dork you may have never heard of...or tried any of these.
The First beer is what looks to be a regular seasonal from RedRock Brewing. Rêve debuted in 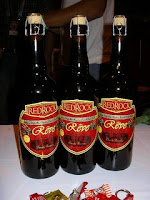 the fall of '07 to much praise from beer enthusiasts and consumers alike. Rêve received the bronze medal at the '06 Great American Beer Festival and the silver medal in '07. Before ever seeing a consumers chalice. Rêve pronounced Reev is a Belgian style triple that's oak aged.... Well 'till brew master Kevin Templin says it's ready.
This fine ale pours alight golden honey color with with a moderate fluffy white head that dissipated to a very thin froth. The nose is a little boozy with banana, cloves malt and ripe mango. The taste is very much the same starting with candied sugar and cloves that transitions into toasted malt and banana. The end is sweet and oaky. The alcohol is warming and welcomed, masked well by Rêve's full body. It adds a whole new dimension to the beer. You really get a good sense of the oak in the finish. Don't get me wrong, it's got a kick. It's 10.2% abv is more than enough to warm your inner beer geek. 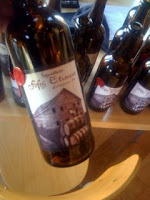 Next comes what is possibly Utah's highest rated beer ever. Squatters' Fifth Element is a colaborational brew that was many years in the making. With input from some of Americas finest brewers, brew master Jennifer Talley crafted a masterful representation of the Saison style that in just a few short months has risen to the top of heap on ratebeer.com's best Saisons. A hell of an achievement considering the company that it keeps. No word yet on if Fifth Element will be made again.
Pours a cloudy apricot/straw color with a fizzy white head that reduced to a thin froth. The nose has a bit a of barnyard funkiness to it, with hints of lemon. The tastes starts with light citrus notes then transitions intotart green apples and peach. Next comes a dry oakiness that compliments the tartness well.The finish is a combination a champagne like dryness and bitter florals. Light and dry but highly drinkable. It's 6.75% ABV is well hidden.
Last is what may be the best beer made in Utah that you never got a chance to try. Back in '05 Uinta Brewing Company purchased a batch of spent Bourbon and Sherry barrels with the intent of experimenting with their Anniversary barley wine. After two years of aging in the American whiskey and sherry, the result was one of the most complex yet smooth ales ever to come from a Utah brewery. Labeled simply BBB (Bourbon Barrel Barleywine) this phenomenal effort was 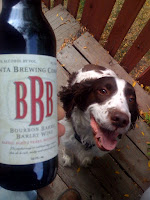 never intended to see the light of day on store shelves. It was instead given out as a promotional gift to out of state beer distributers and brewing companies. As well as being entered in the Stockholm beer and whiskey festival. Were it received high marks.
How did I come by it? Well, let's just say it made an appearance at an out of state beer festival. If you know of a bottle or know how to get your hands on one, snatch it up. You've found a very rare and precious thing. Steve at Uinta said "there is no intent to ever put BBB into production" but also said, "you never know".
Pours a dark amber/orange with a thin cap of foam. The nose was a nice perfume of Bourbon, malt and vanilla. The taste started with hazelnut and sweet malt. Next comes smooth Bourbon with dark ripe fruits; raisin and fig.The finish had a rounded, well hidden boozy mix of whiskey and pine.
Let me know if you've tried any of these, or if you think that there's a beer out there worth mentioning as exceptional. Cheers!
Posted by Mikey at 9:29 AM

Luckily, I've had all three. Each one was nice, but I've got to give it up to Jenny and the 5th Element. If she ever decides to produce a few thousand bottles, I'll be busy, and happy sending these all around the country. Cheers to another year of good Utah beers. My favorite addition must be Wasatch Winterfest, Fifth Element, and 4+ Wildfire. Though, I think the Wildfire has been around. Anyway, how about your 2008 beer highlights.

Never fear! the '08 utah beer year in review is comming!

I tried the Reve from Redrock a couple of times and the skill behind that beer is unreal!! I like that the crew at Redrock does not let this beer out untill it is ready... Good things take a long time!

Last night the History Channel aired a documentary on the history of the big US brewers and it got me interested in home brewing. Using your blog as a reference, I've tried to track down an area club or group to join for education and support. Thus far I'm hitting a dead end with the club ZZHops, their website and phone number appear to be out of service. Can you recommend a starting place for me?

Many thanks,
Patrick May in South Jordan. email patrick.shane@rocketmail.com

Have you gone to the Beer Nut on State Street? They will get you on track. Homebrewing is fun and it gets better and better as you learn.

I sure wish my palate was a tenth as educated as yours.

But, I do love beer -- and would kill to try these.

Ah Shucks Donny. Reve should be coming around again soon and Fifth Element may be returning late summer. Cross your fingers!

I've updated the ZZhops link, thanks!

Actually, the ZZHOPS e-mail is pissboy12@yahoo.com sorry about that, mike