Lost on the Boulevard 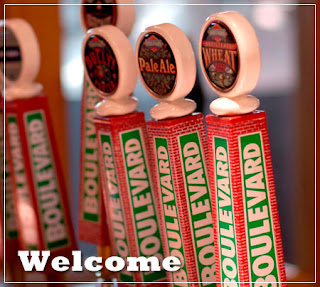 First off let me preface today's "beer spewage" by saying "I can't find these beers!"However much as I'd like, I can't tell you anything about them. So, I need your help in tracking them down! Anyway, I have It under good authority ("AndytheJerk" & Carlson Distribution) that Boulevard Brewing Co. out of Kansas City, Missouri has entered the SLC market with two of it's six; year-round beers.
Founded in 1989, Boulevard Brewing Company has grown to become the largest specialty brewer in the Midwest.
Boulevard's American-style Wheat Beer and their Lunar unfiltered Brown Ale are said to be available at right now at Macey's Foods and Reams. I don't have either of these stores near my home, and the stores I have visited have turned up bupkis. I called Carlson Distribution, they assured me that they are available, but couldn't be specific about exactly which stores are carrying them. So please brothas & sistas help me help you. Cheers!
Posted by Mikey at 5:23 AM

I think they have the Lunar Ale on tap at The Republican, haven't tried it yet though...

Okay! that's what I'm talking about! Much thanks Ed.

I've had two of their beers in Iowa, but I've never seen them here in Utah. Any more info would be appreciated. Thanks for the info Mikey.

Boulevard just recently got into the high gravity beer market with their Smokestack Series. Being from Kansas/Missouri originally, I can confirm that their session beers are drinkable; however, this new series of doubles, triples, and quadruples are truly amazing. I'm not sure if we can get them in Utah yet, but since I just returned from a holiday visit to the midwest with the fam, I have now have a healthy stash of the quad (i.e., Boulevard Sixth Glass). Best of luck finding them, it would be great if we could get them here eventually.

So I tried the Lunar Ale on draft tonight. Pretty tasty Dunkelweisse or whatever.

Of course, I tasted it after the Utes game; when I was already a little drunk, and in a very good mood...

Where did you have it, The Republican?

They are carrying Boulevard at Maxwell's East Coast Eatery up in Park City. They just opened a couple weeks ago, have good food, TVs and a bunch of handles. Not sure exactly which they are pouring, but I know its there.

I've purchased both the Lunar Ale and the Wheat at Harmon's - the one on 9th East at 70-something South. Both are tastey.

Goldminer's Daughter Saloon at Alta has both on Tap.

Yep. Both are at Harmons.