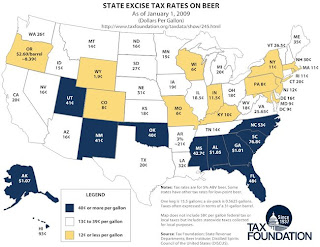 Be aware the Senate Finance Committee in Washington, DC is currently considering a proposal to increase and equalize the excise tax for alcohol beverages as part of health care reform deliberations. This proposal would triple the excise tax for 4.5% ABV beer and impose even higher excise tax rates for higher ABV beers.

Senator Orrin Hatch is a member of this committee. Contact him and oppose the Tax Increase. Let he and the other committee members know that you oppose, in the strongest possible terms, raising the federal excise tax on beer because of the serious consequences it would have on small brewers and the craft beer they brew.

Utahans already pay a disproportionately higher share of taxes compared with other products - federal, state and local taxes represent over 40% of the retail price for beer while the same taxes equal nearly 24% of the price for all other purchases.

There are other options for tax increases, soda-pop for one. Let your opposition be known.
Posted by Mikey at 4:44 AM

I was just researching about your post here because I hate taxes especially on my beloved beer. I found the SFC's reform proposal
(here's the link: http://finance.senate.gov/sitepages/leg/LEG%202009/051809%20Health%20Care%20Description%20of%20Policy%20Options.pdf)
and, unless I misinterpreted it—wouldn't be the first time— it looks to be an improvement. As far as I can tell, the tax on beer would be $2 less overall. Also, brewers who produced less than 60,000 barrels a year (2M gal) would only be subject to a $7 per barrel tax. As this endeavors to make the tax uniform on all forms of alcohol I don't think it will matter the ABV.
Now what Utah is doing, I don't know. But it seems on a federal level this could be a good thing for craft brewers. I hope anyway, as I want to be one someday :)