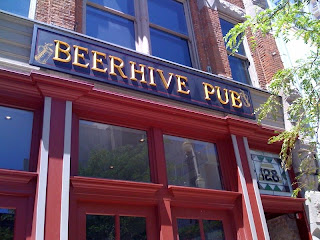 Utah's beer community will soon have a new place to satisfy their beer cravings. After a year of planning and obstacles the Beerhive is finally in the home stretch. I got a preview last night of what is sure to be one of downtown's preeminent hot spots. 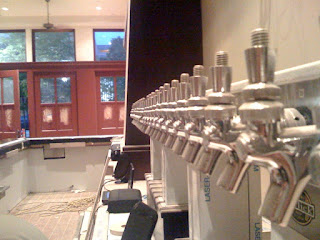 First off this place is all bar. The bar in this place may be one of the longest in the state. It spans nearly fifty feet and has a beautiful, grand back-bar that's near twenty five feet tall. The refrigeration unit is massive and has room for all the kegs and hundreds of bottles of beer. Twenty-four taps are plumbed right now and there are talks of installing a cask beer engine.

The Beerhive also sports a first in the area, a frosted rail. It's a strip of ice that spans the bar to ensure that drinks maintain the perfect temperature... If desired.

The downstairs area is quite nice with exposed 19th century brick and stone walls. Pool tables and a possible shuffleboard table will occupy most of this space. 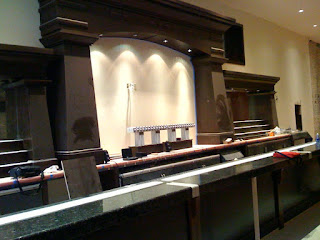 Owner Del Vance is working hard on providing the Beerhive's customers with some of the hardest to get craft beers from around the nation. There is a very real possibility that patrons will be enjoying such sought after brands as Stone, Dogfish Head, Ninkasi and Deschutes signature line up. I'll throw up more info on the beers as they become available.

The Beerhive is slated to open near the second week of July. Cheers.
Posted by Mikey at 4:25 AM

It was up and running yesterday. Works quite well.

Nice. I'm looking forward to having a pint here. I could care less about the frosted rail since most beers are always served too cold as it is, but a cool idea nonetheless. I'm excited for this place.

This is very cool. I can't wait.

Where will this be located?

I am looking forward to having Del Vance autograph my copy of "Beer in the Beehive".

The Beerhive is at 128 south Main Street in SLC.

I think this may just be paradise!

Too bad the beer on tap will be the weird-tasting Utah 3.2 beer instead of fat tire or sierra nevada. Hopefully they will have some good beers in bottles.

Hmmm...I've never heard anyone say that 4.0% beer is weird-tasting (It's not 3.2%, but I assume you already knew that). International beer judges don't seem to think it's weird tasting, as Utah brewers always come home with handcarts full of medals from the big international beer competitions.
It's just hard to brew some styles at 4%, like most of the Belgian styles (but that's okay 'cause they shouldn't be kegged anyway. Bottle-conditioning FTW!) and some of the German styles, so it kind of limits what brewers here can make. The British brewing tradition has most beers between 2 and 5 percent ABV, with the exception of the IPA's and heavier Scottish ales.
But this is an old argument, and having made it, I really really hope the legislature gets around to passing the draft bill next year and getting rid of Utah's 4% draft limit, because you're right, there's lots of commercial production beers that I'd love to drink on draft. Sierra Nevada makes a fine pale ale that can always be relied upon when there's a lack of anything more interesting, but don't get me started again on how we don't need that boring-ass mediocrity of a beer called Fat Tire wasting Utah's shelf space and especially not the tap lines...we already had that fight on here too.

[b][url=http://www.cheapuggbootsonlineshop.co.uk/]www.cheapuggbootsonlineshop.co.uk[/url][/b] Many individuals are looking for an excellent pet. Irrespective of whether you're single, newly married, married with 4 youngsters, or going to retire, there are some points to look at when you start off trying to include a pet into your family. If you consider possessing a pet, you almost certainly feel it's important to choose between possessing a pet or possibly a cat, but really you'll find a great number of animals that can develop into best pets..

[b][url=http://www.uggsaustraliawebsite.com/]uggs australia[/url][/b] I acquired 10 lbs within the initial 10 weeks of this pregnancy and i didn't at any time say it on the following mainly because I noticed some ladies get REAMED for indicating simply how much they'd gained. Here I am gonna be 13 weeks Monday and even now at ten lbs. It was like my physique gained all of it simultaneously and now I'm just riding along.

[b][url=http://www.cheapuggbootsonlineshop.co.uk/]ugg boots[/url][/b] You can expect to do well if it suggests ample to you personally. This is simply not a similar as "failure is not a possibility," and that is a fairly idiotic declaration. "You'll do well if it indicates sufficient to you" genuinely usually means you are going to do the unpleasant points -- like building twenty product sales contacts everyday -- for the reason that result -- you get to maintain working your own attractive organization -- inspires you to accomplish the challenging tasks..

[b][url=http://www.bestonlinesalestore.com/]louis vuitton handbags[/url][/b] EFTPS was released in 1996 and considering that that point more than 4.six million taxpayers have enrolled inside the process to create their federal tax payments electronically. In fiscal calendar year 2003, EFTPS processed far more than sixty eight.five million transactions totaling much more than $1.five trillion. Taxpayers could make payments via a secure website or by cellphone 24 hours a day, seven days per week from your home or office environment; timetable payments around 120 times beforehand (for firms) and 365 days in advance (for people); and assessment the last sixteen months of tax fee record on the internet or by contacting Buyer Company.

[b][url=http://www.uggsaustraliawebsite.com/]www.uggsaustraliawebsite.com[/url][/b] Having said that, tag heuer monaco reproduction watches have exceptional layout and each style of tag heuer watches do has identify. One of many layout names is Swiss luxurious which can be very well recognized throughout the world. Swiss luxurious edition of tag heuer watches is very long lasting, refined and stylish in style and design..