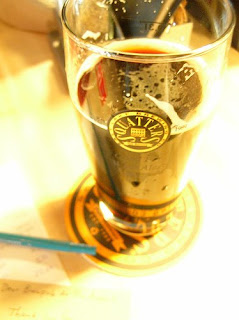 Hop Riot is on tap at Squatters. Formerly Hop Rising, the name was handed-over to the the Utah Brewers Cooperative as they are currently formulating a double IPA and it looks like it could come out being called Hop Rising Double IPA. Can't wait for this one to debut!

This is a really good pale ale, and it's apparently very popular because it makes frequent returns to Squatters' seasonal taps. Hop Riot is a classic American Pale Ale, golden/amber in color, packed with Amarillo, Cascade and Chinook hops. Super refreshing and drinkable. Hop haters need not apply. Cheers!
Posted by Mikey at 4:46 AM

That Double IPA is going to be amazing if it is based on the Hop rising/Prohibition Pale Ale/Hop Riot recipe. Also, Hoppers has a really nice new Pale Ale on tap.

Tried the Hop Riot for the first time last week and loved it!

Any more news on that Double IPA?

The word In that double IPA is early-mid August.