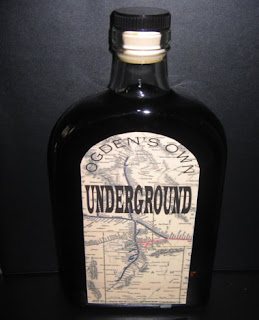 I can't believe this was below my radar as long as it was, but in my defense I concentrate more on beer with a minor in spirits. For a few years now High West Distillers out of Park City has had all the bragging rights on being Utah's only only local distillery.

Not no more. Ogden's Own Distillery is Ogden's first licensed distillery since before prohibition. This is a full-on distillery that concentrates only on spirits. UNDERGROUND is the distillery's debut spirit. Owner Distiller Timmy Smith describes it as a 40% alcohol Handcrafted Herbal Spirit, with an "interesting" herbal effect. And says it's best enjoyed chilled and as a shooter.
Smith says fans of UNDERGROUND are drinking it on the rocks and creating various concoctions.

Ogden's Own is working on being on liquor store shelves here in Utah by the end of June. As that gets closer expect to see more and more info. Salude!
Posted by Mikey at 4:44 AM

A year ago a friend of mine told me about a conversation he had with a guy who claimed he was distilling in Ogden and making something that was just like Jagermeister. Apparently neither one of them were making it up. I did hear that it was pretty good from a different person a month or two ago. I can't wait to buy some and report back.