Hoppers is out of Midvale 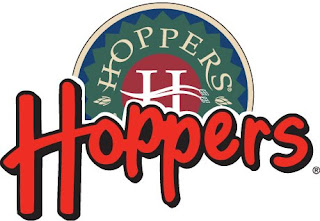 Not too long ago if you wanted a craft beer from a specific brewpub you could only get it from that brewpub. Oh how the time they is a chang'n. RedRock & Bohemian are building/built new breweries, Roosters and Squatters have multiple locations, Epic Brewing is on deck and the list goes on.

Now entering the off premises beer market comes Hoppers. Last week for the first time since opening their doors, the Midvale brewpub has it's beer in an outside establishment.

The Beerhive is Debuting Hoppers "This is the Pilsener". It's made with all German grains, hops, and and a Kloster yeast strain. This is a great German style Pils. It won it's third gold medal in a row last June at NABA in Idaho Falls.

Brewmaster Donovan Steele will be rotating his seasonals on this tap at the Beerhive. Once the Pils is gone the Double Black Lager will slide in followed by Hoppers Oktoberfest and McGee's Red Ale. Donovan said "I'm only going to put on tap the best beers I have to offer. Because Hoppers doesn't have a bulk base grain silo, all of our grain comes in bags, allowing me to bring in only premium malts for 100% of the grains used in every batch; more work for me but a great excuse to use only the best. This lack of convenience has become a blessing".

Besides getting his beer out of the brewpub Donovan got some other good news. Hoppers just purchased a brand new bottling and filler cap system. This means Dono will now have the ability to get Hoppers into the high gravity beer game.

Donovan is still undecided what his first bottle conditioned beer will be, but should have it figured out by next week. And if all goes well he'll likely be
bottling in a little over a month, maybe two. I know a lot of people will be looking forward to these beers.

Damn, this is turning out to be one helluva year for beer in Utah. Prost!
Posted by Mikey at 7:16 AM

Whatever Donovan makes, it will be damn tasty. I'm voting for a high gravity version of the Out of Bounds Alt, or a Weizen Bock like Schneider Aventinus! Also, it would be nice to see Lil Pips bottled, since that beer kicks ass.

Hey, I'm open to recommendations. I want to make beer people will want to drink and not just look at. I love the Aventinus Weizen Bock:)

Well since we're throwing suggestions out there, I'd like to see someone tackle a Rye IPA... a Rye-P-A. Brilliant!

While I love a good alt, Dopplebock and Weizenbock, here is my suggestion Dono.That Saison you made with the multiple yeast strains. That was one of the best beers I have ever had.
Geoff

Oh, yeah Rye sounds awesome. I had Founders Brewing's Rye IPA recently, it was nice. But how about a Dunkel with Rye- that sounds nice. It all depends on how much you are making and hoping to sell. Small batch= more creativity. I love me some Rye beer.