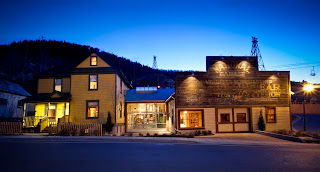 This isn't really beer related but it's close... and pretty damn cool.

David Perkins' dream of a destination whiskey distillery is almost a reality. The High West Distillery and Saloon is just weeks away from from opening the world's first ski-in gastro-distillery.

Located in the historic National Garage and the Watts property at 703 Park Ave. near Park City's Town Lift. Perkins and his partner James Dumas have spared no expense in bringing the Park City treasure into the 21st century, while retaining 80 percent of its original materials - enough to keep it on the National Historic Registry.

The house which is adjacent to the garage now features several dining rooms and a bar. The historic garage or livery is large enough to host business and social groups and of course the 18-foot-tall German-made brass still.

High West actually has been distilling whiskey in a Salt Lake City warehouse for four years. High West rye and vodka has been for sale at Utah State Liquor Stores for a number of years and High West's Rendezvous Rye came home with Top Ten honors at the 2008 San Francisco World Spirits competition.

The High West Distillery and Saloon will be open to the public for tours, dining and sipping. It also will cater to private parties.

I can't wait to check out David's new place.

I am hoping you can give me some direction. I am looking for a bar that serves Dead Guy Ale from Rogue Brewing.

More to the point, I am interested in the bottle caps. I recycle bottle caps into cool, trendy jewelry and Dead Guy Ale caps are REALLY cool.

Any help would be appreciated.
Thanks!
--Jana