The Place for Beer in Park City 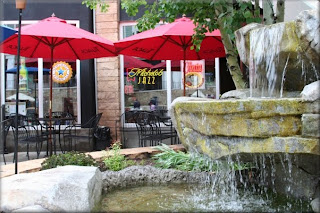 Park City is a bit of an anomaly in Utah. With it's high number bars and restaurants it's a town built for adults who have a penchant for enjoying nightlife. For the most part Park City is a cocktail town; there's nothing wrong with that, it's a resort town. If you wanted a good beer you most likely went to the Wasatch brewpub. Why not? they make some of the best beer in the state.

But if you want a little more variety or something more familiar many bars in PC offered limited options. Until recently. Like most places Lindsay O Michaels is a cocktail place, with one exception. They want to also be know as PC's beer place.

Every month since opening LOM's Beer guy Scott Kirkwood has been working on expanding the bars beer selection to where it's now the the largest and most varied in Park City.

Thanks for the update on this bar. I'll be checking it out.

I have been to Lindzee O' Michaels many times and it is without a doubt the best beer bar in Park City. Great selection, great staff and I get the right beer served in the right glass which nobody else seems to know how to do. Very highly recommended!

Yeah, I need to hit this place up.

Thanks for the post Mike. I am Scott the Co-Owner of Lindzee O’ Michaels. Since opening in May, Steve and I feel that we have filled a void which is long overdue in Park City. That is to provide the greatest selection of world class beers available in Utah. Each one has been carefully chosen based on what our customers are asking for and reviews on sites such as Ratebeer and BeerAdvocate. If you want a PBR or Bud Light, you got it. But if you want to venture out and have a 100 percentile or an A+ like a Rochefort Trappistes 10 or a Chimay Grande Réserve, we have that as well. We will continue to expand our menu based on customer requests and availability through the DABC. We hope we have the opportunity to see you in Park City in the near future. Cheers!

I am (was) not really a big beer drinker until I found this place with a friend. Now I think my life is ever changed :) I fell in love with the Rogue Mocha Porter and the Deschutes Black Butte Porter. I didn't think liked darker beers, but I guess I had not had the right one. Thanks for the suggestions Andy. Awesome bartenders!

Excellent selection, great location and vibe. Lindzee's is the bomb. 'nuff said, this is the only place to go in PC IMHO. Love it!

I love Lindzee's! I have been going there since they changed from Kritauf's. Steve the owner is cool as hell.

i have visited Park City and i think it is the most suitable place for a couple to have a drink. i along with my girl friend spend whole evening their and we feel very relaxed. i really feel great while drinking and smoking my cuban cigar.