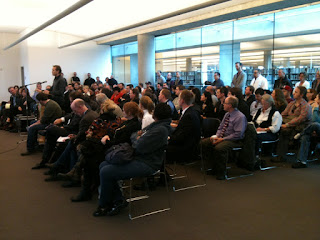 It was a somewhat strange meeting full of laughter and gasps. It was like listening to room full of war veterans sharing their stories of combat. Ranging from the bizzar to the heart breaking.

I'm talking about yesterday's meeting of the DABC Review committee. It was a bigger than expected crowd that showed up at the Main SLC Library. The attendees were a wide array of bar owners, restauranteurs, brewers, vintners and consumers. Many offering up their stories of the insane, stupid and bizarre situations that they currently deal with on a weekly if not daily basis. Here are a few examples.

In 1879, the Shooting Star, Utah's oldest operating bar was established. You'd think a bar with such longevity would have a grandfather clause a mile long. Not so. Every year the owner has to get permission from a church, school, park and a library; all of which never existed when the bar opened in the 19th century.

A restaurant owner in Park City pointed out the difference between pouring wine or beer at a table versus pouring the same bottles at the bar behind the Beer Burka. Obviously a keen tactic designed to save the souls of children and the other "saved".

The Brewvies debacle. In case you don't remember, a few month ago Brewvies Cinema Pub was fined a few thousand bucks for serving alcohol during a movie (the Hangover 2) that featured nudity. Because of the nudity Brewvies was charged as operating a sexual oriented business. It was a fucking R rated movie!!!

A restauranteur in Park City received and payed for her alcohol license on one day, the very next day it expired and it needed to be renewed. Because apparently all liquor licenses expire on the same day in Utah. I guess it was going to be to much of a hassle for the DABC to say, "let's hold off a day, it expires tomorrow".

One restaurant owner said he had to shut down his beer taps three weeks in to the month because he had exceeded his alcohol/food percentage for the month because the high tax on beer was bringing in more money from beer than food. Remember, a restaurant must sell more food than liquor to stay in compliance. I believe it's 70/30?

No "sales" on alcoholic beverages in bars (happy hour), yet the DABC has "sales" in liquor stores.

The commission will take what they learned from this meeting an present it to the legislature's leadership on January 23rd.

I have a feeling those who will make the final decisions have already decided what they will and won't do in regards to the DABC. This whole thing that I've just told you about, is just a show to make you feel like your "part of the process". In my opinion of course.

The public can also relay their comments to the committee by emailing them at ReviewDABC@Gmail.com.

Thanks for keeping us informed Mikey. I was not able to go to the meeting, but I will be sure to use that email address to let the DABC know some of my frustrations.

I wasn't able to break away from work for this, but I know the frustrations of thinking that open meetings like this are there only to calm the masses. I work with the federal government on a regular basis and I see the same things out of D.C.

I read up about the meeting through a number of news sources, and I am a little disappointed that most people focused on how goofy the laws are rather than giving ideas on how to make the DABC work better. Those laws aren't going to change, but if we can get the DABC to be a little more even-handed and run a little smoother, that would help the situation (however minor).

But it all boils down to the fact that people who know nothing about alcohol or consumption patterns, nor want to even learn anything about it, make up the rules in this state.