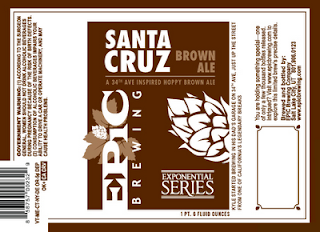 There have been a lot of trends developing in the beer universe over the last decade from IPA's to Sours to Barrel Aging, brewers have been pushing the beer envelope in every possible direction.

Lately the newest trend has been "The Hybrid Beer". These are beers that are not technically correct or brewed to an exact style. They take from one brewing discipline and add something from another.

Black IPA's/Cascadian Black Ale are an example. Crossing a porter with a pale ale shouldn't work but it does (for some it doesn't) if done properly.

Epic Brewing's newest beer is an interpret of the recent Black IPA trend. The Santa Cruz Brown Ale is a true hybrid. For this beer Epic combined the rich malty backbone and color of an American brown ale with piney, resinous American hops, creating a completely new and unique type of beer.

Santa Cruz will debut tomorrow (January 19th) at Slackwater Pub and Pizzeria in Ogden, Utah. Everywhere else on Friday.

I cannot wait to try this one :)