My Companion is Elder Brett 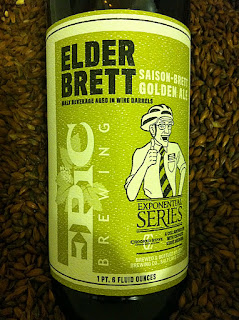 I'm on a mission, a mission to spread the gospel of beer. Over the years, I've had many companions - from all over the world - to help proselytized to the yellow fizzy Gentiles.

Some have been American, British, Czech, German and even a few Danes. But the "companions" that tend to really "bear their testimonies" are the Belgians. These guys will eventually convert the most agnostic of beer lovers.

Last June, a missionary from the Church of the Crooked Stave in Colorado made a pilgrimage to the High Desert Epic Cathedral in Salt Lake to create a new super missionary to spread the holy word. His name? Elder Brett. 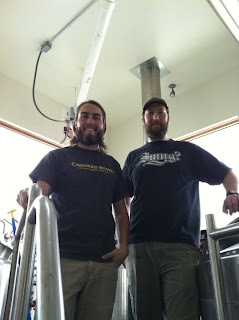 When Crooked Stave's Brewmaster/Owner Chad Yakobson met the guys at Epic Brewing they found that they had a lot in common, a collaboration was in their future.

Elder Brett was brewed at Epic by Kevin Crompton, Epic’s Brewmaster and Yakobson. After several weeks working on the recipe and selecting the proper Brett strains and barrels for the beer to morph from a golden Sasion into a Saison-Brett Golden Ale.

The barrels were inoculated with a blend of four different types of Brettanomyces. Aging for over nine months in the barrels allows the character of the unique wild yeast to fully express itself in the beer. The result combines all the elements for a truly sublime complexity.

The aroma is rich with the musty, barnyard-like character that “Brett” is famous for as well as some remnants of the white wine. The flavor also has wonderful amounts of fruity notes both from the yeast and hints of the peach fermentation that took place previously in the barrel, all rounded out with a pleasant and refreshing acidity and incredible drinkability for an 8.8% ABV beverage. The beer has a round body, is dominated by yeast character, but is tart enough to leave the palette refreshed and wanting more.

There aren't many "Brett" beers made in Utah, this one is only the fifth one made here and more are coming! If your a fan of sours, you life is about to get a Hell of a lot better. Available at Epic Brewing on January 26 (Thurs) and should hit other states sometime in February.

This sounds great. I can't wait to try it. I guess I know where I'll be Thursday after work.

Just am enjoying your site..

awesome beer stopped by the nut for a new home brew batch and then EPIC - (which seems to become a pattern in my home brewing habits lately) - I wish i could say more on this beer - but you nailed the description. This will be winning what ever comp they enter it in. My mind is simply blown away that we get this local high quality in UT. now if only DBAC could get some descent sours.....

Outstanding flavor goes out to the new Epic Brewing Companies "Elder Brett". You converted me. I'm glad to have been the first to sample it today.