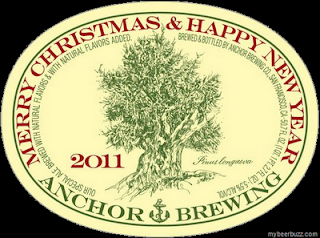 For the first New Beer Friday of 2012 we get to enjoy a beer that's long overdue.

Our Special Ale 2011 (Anchor Christmas Ale) has been released annually since 1983. Every year is unique in some way. It's one beer I always look forward to every year. I've been drinking it since 2002. Sadly I don't love it every year. This year is one of those "meh" years.

The 2011 has a nice soapy, herbal nose with prune and raisins. The taste starts malty up front with cocoa, spices and dark fruits hit the tongue strong. Semi-sweet cola rounds out the back end. Hints of spices & prune make for a rather dry finish.

This one of those beers that won't "wow" you, but will make you glad you had it.

I had it at the Beerhive, but it usually shows up in various liquor store that normally sell Anchor Beer.