Low Carb Beers You May Have Never Considered 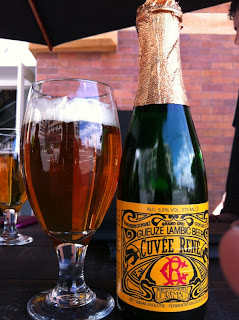 A year ago I decided that it was time to getting my fat ass back in to shape. For the last decade my body had been expanding like bloated dough under a heat lamp. The cause was the same that many Americans are faced with, high chloric diets and little to no exercise.

For a craft beer lover loosing the LBS's is not an easy thing. Beer is the antithesis for trying to loose weight. It is a very nutritious beverage, high in calories and carbohydrates. I never sought out the "low carb beers" over the last year because.... Well, that's not beer, at least the beer I know and love. But it got me to thinking, what is the lowest carb beer option for a beer snob like myself?

After minutes of research I found that there is no real data on the beer style that I found to be the least naturally made carbohydrate laden ale. The Lambic.

There are many styles of Lambic. The basic lambic is a cloudy, uncarbonated, bracingly sour beer that is generally about two to three years old. Unlike conventional ales and lagers, which are fermented by carefully cultivated strains of brewer's yeasts, Lambic beers are produced by spontaneous fermentation and are exposed to wild yeasts and bacteria such as Brettanomyces bruxellensis (brett) and B. lambicus.

These "wild yeasts" used in the fermentation of these products eats sugars that regular beer yeasts can't. There are a lot of sweet lambics out there - Lindemans for example - that are loaded with sugar. The unfruited versions (gueuze) from Hanssens, Cantillon, Oud Beersel and Drie Fonteinen will have the lowest sugars.

These aren't a practical every day option for the Utah beer lover. Unless you have an iron pallet. The high tartness and acidity will wear on the stoutest of tongues, but when your in need of beer that's full on flavor, that won't shit all over your diet, you have a friend in the "Brett based beer".

As I pointed out earlier, there is no hard data on the carbohydrate levels in sour beers (that I could find), theses observations are based on the known functions of the the yeast strains discussed.

Pretty sure New Belgium discontinued Skinny Dip and replaced it with Summersault... not sure about the carbs in the latter...

I didn't know that. Thanks, Jared.