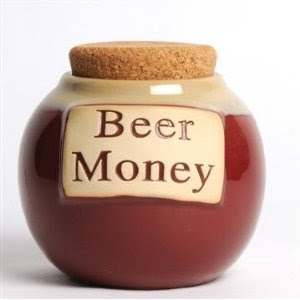 This story has been floating around for the last week or so, and even though it's beer related it seemed to be more about the lack of spending prowess by some individuals to use the money that's allocated to them rather than beer itself. So, I guess we'll talk about it and you can decide if it's worth discussing.

If you aren't aware of what I'm talking about, let me back up. There's statute on the books that gives cities and counties some of the taxes collected on the sale of beer. This statute also says that "revenue must be spent on programs and procedures designed to prevent or reduce the abuse of alcohol by minors and adults". Not a bad way to use the taxes, right? Seems like an appropriate use for beer tax money to me.

Apparently 26 municipalities around the state have come up with some creative ways to use this money - by diverting hundreds of thousands of dollars of beer tax money into everyday city or county activities. Here are some stellar examples. To combat drunken driving and other alcohol-related problems, the city of Riverton bought an inflatable arch. The Utah County Sheriff’s Office bought a dog. Delta helped pay for crossing guards. Not exactly beer related, eh?

If it’s determined any of the 26 municipalities misspent the money, a portion or all of what they would have received from the beer tax in fiscal 2012 will be withheld.

As long as Utah's beer consumers are getting raped by taxes, the very least lawmakers could do is craft language that's specific about where our taxes are going and appropriately punish those who can't mange their beer tax money better.

Source: Salt Lake Tribune
Posted by Mikey at 8:25 AM

I was under the impression that a lot of this money went to school lunch programs and the like, or is that just on the state level?

At any rate, unless that dog is a beer-sniffing dog (and what dog isn't, reall?) then that money probably is not being used correctly. Then again, other than adding more excise cops, I'm not sure how that money really could be spent and stay within the spirit of the law.

I wouldn't expect anything to come from it. Remember a few years back when the Feds started handing out money to the states from that big tobacco lawsuit. All of that money (millions) that Utah received was supposed to go tword smoking prevention and education.

Most of it got diverted to other programs that were experiencing budget shortfalls. I think the state will turn a blind eye to beer tax offenders, just as it ignored the mandate on the federal tobbacco money.