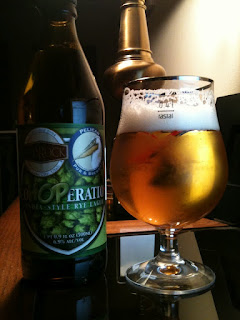 I love collaboration beers! There's nothing better than having creative minds come together in the brewhouse and produce something entirely new. That's what's coming your way tomorrow, the first-ever collaboration brew between RedRock Brewing Company and the Pelican Pub & Brewery in Oregon.

The concept for this beer began last spring, while Brewmasters Kevin Templin and Darron Welch were judging at the North American Beer Awards. These two previous winners of the Great American Beer Festivals 'Large Brewpub of the Year' had found over years of beer judging that they had a lot in common and shared similar philosophies in regards to brewing.

The result is a beer that's designed to be very hoppy. It has the hop bitterness and profile of an IPA, but with the hop character of a pilsner. Cleanness of the flavor profile will come from fermenting with lager yeast. Added spiciness will complement the malt character by including malted rye. A unique hybridization of existing beer styles has created something completely new and different.

Besides having the best name, ever! this beer pours a brilliant straw-tinged amber color with a vigorous off white head that leaves webs of lace all over the tulip.

Upon first impression, the nose is like an ordinary, citrusy IPA. As I bury my generously sized, ancestral, German sniffer deeper, the pilsner malt, and noble hops come through.

This is the beer that hop heads WANT and the masses crave. Great IPA qualities. The hops in this beer are amazingly intact. Front and mid body the citrus and florals seem to dominate the palate. Gritty pale, and caramel tastes appear. Finishes very rind-like with notes of berries and some dry spiciness from the rye malt. Very soft and mild, with a decent carbonation. Not extremely sweet; but very dry and bitter.

A refreshing and different variation from your run of the mill IPA. The 6.9% ABV, while not terribly strong, will sneak up on you if u have at least 2 of these 500ml gems.

CoHOPeration Will be only be available at RedRock locations starting tomorrow and at the Pelican Pub & Brewery. I imagine the Bayou and Beerhive will snag some as well.

I'll be picking one up today!

I'm psyched for it!

Very very cool. this Beer sounds so tasty n looks damn good.
doubt most Utah beer drinkers even realize what a jewel they have in their hands, they never do. redrock has always had the best lagers in the State.
Cheers to RR brew crew and Pelican brewers.

Thank you for this explanation of the CoHOPeration lager. I'm visiting Salt Lake City for the first time and had no idea that you all have such good beer. I also had no idea that I'd purchased such a brand-new beer at Red Rock. It was excellent and so I sought more information on the web and thus found your blog; the description you give of the beer is quite accurate. It's sad to think that I won't be able to find it in Georgia ...