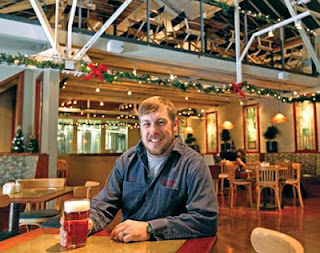 More beer related stuff for the beer minded next week. Desert Edge will be having a Beerbreak/Meet the Brewers on Tuesday from 6 pm till 8 pm. Come on out and tip back a pint, get to know Head Brewer, Chris "Santa" Haas, talk, ask questions and sample three (3) brand new beers.

As it turns out, another Utah brewery came away with some awards at last weeks Craft Brewers Conference in San Diego, CA. Moab Brewery brought home two trophies from the first annual "Canny Awards," which recognizes excellence in beer can design. Moab's Johnny's American IPA can, took first place in the "Shelf Presence" category and third place overall in the "Best Can Design."

Congrats to Moab and we'll see you Tuesday at Desert Edge.

Saw an ad in the latest Draft Magazine for Moab. It listed Export Stout and Hopped Rye among the other Desert Select beers as well as full strength versions of the canned IPA and Lager. Any word on when we'll see those?