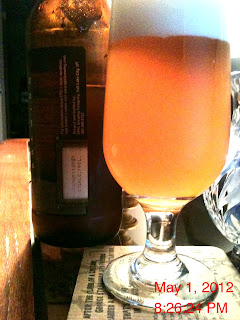 Yup, it's just like it sounds. Epic has taken a classic Belgian style golden ale and corrupted it with a little American-style-bending-flair to produce something akin to a Belgo-IPA.

Corruption is Epic's second collaboration beer with DC Brau (the first was Fermentation w/o Representation).  Epic brewed a batch of Brainless Belgian Golden Ale and let DC Brau corrupt it with four types of hops. Chinook and CTZ in the boil with more CTZ for aroma. Whole leaf Centennial in the hopback and Citra in the dry hop. The result is a spicy/tropical IPA.

Pours a murky orange color with two thick fingers of white head. The nose is of citrus hops, mango, tropical fruit, pine hops, and fruity malts. The taste starts with piney and citrus hops. Estery yeast, mango notes and fruity malts come next with, pineapple, peach and orange peel rounding out the end. It finishes bitter and reasonably dry. 6.2% abv

DC Brau and Epic, have both been honored with invitations to SAVOR, will be serving this beer in Washington DC as a celebratory beverage during the craft beer and food event in June.

Brainless Corruption is bottled in the standard Brainless Belgian bomber. The only indicator that beer is the "corruption" version is the print on the date/batch area of the bottle.

This beer is an EXTREMELY LIMITED release, so only 2 bottles per customer. Only available at the brewery!

Is it available now? If so, do you know the price?

I'm guessing it's the same price as the regular Brainless, seeing as the only indicator is the date?

Did you get some Doug?

Gone Already? Damn, that was a "small batch".

I wish I could get my hands on some more, it was good.

I would have liked to get a bottle. It sounds delicious. Its there any word of it being made again?

We will be opening some at our Epic beer fest on the 14th (to kick off Craft Beer Week). More details will be available this weekend.

Yeah, I stopped in on Wed. They still had it listed, but it was all gone.
---Ricky