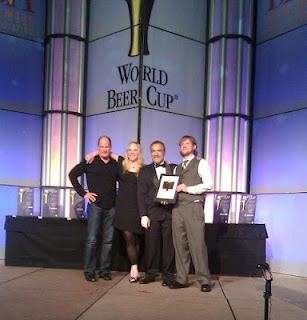 Brewers from around the world received awards from an elite international panel of judges in the 2012 Brewers Association World Beer Cup. The ninth bi-annual competition boasted the strongest field of entrants on record, with 799 breweries from 54 countries and 45 U.S. states entering 3,921 beers in 95 beer style categories. A 17.7 percent increase over 2010, the entries were eligible for gold, silver and bronze awards in their respective categories. Judges presented a total of 284 awards.

Normally, Utah's brewers do pretty well at the bi-annual competition. This year, the only medals were awarded to Squatters and the Utah Brewers Cooperative. Here are the winning local beers with the complete winners list a well. Congrats!

Congrats to Squatters and UBC, they always make great beer. :-)
Not sure who all submitted this year, but I don't usually enter beers into the WBC. Maybe fewer wins for Utah means fewer entries this year. Don't know for sure.

Thanks Mikey! We are very excited about our medal wins. Especially since this is the first beer competition with Jason Stock as our Brewmaster.
Cheers!