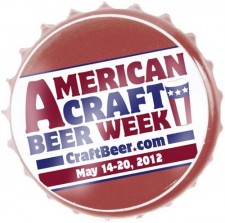 Next Monday begins American Craft Beer Week". Seven days set aside for lovers of craft beer to "geek on" their favorite beverages while hopefully educating the minds of those who still see beer as  just a fizzy - tasteless beverage

Many of Utah's breweries have events planned and we will give their plans as they roll in. Today we have Epic Brewing's list of events starting next Monday and it looks to be...well... Epic!

Monday, May 14 5-10pm – Mini Beer Festival at The Bayou: The Bayou will be opening every Epic beer they have on hand including one case of the very rare Brainless Corruption brewed in collaboration with DC Brau. If you missed-out on purchasing a bottle, this may be your only opportunity to try it - in the near future. Tickets are limited to 60 people so don't wait to get your tickets. Tickets are available only at The Bayou and are available now. You must present valid ID at the door for admittance both to purchase tickets and to attend the mini-festival.

Wednesday, May 16 7-10pm – Hop Syndrome Re-Release Party at Slackwater Pub: Ogden and Northern Utah Beer lovers, this is for you! Hop Syndrome has be tweaked with this newest release. This version has been " Hop backed" with a new hop from Europe but still dry hopped with Calypso and Crystal.

Thursday, May 17 6-10pm – Two Year Anniversary at The Beerhive Pub: This special party will feature a very special collaboration beer between RedRock Brewing and Epic. No idea of what it will be, but the word "cask" has been mentioned.

Friday, May 18 4-7pm – Beer Week close-out at Epic Brewery: For the final event of the week, Epic’s inviting everybody out to brewery for a summer cook-out. There will be something for everyone – grilled hamburgers and veggie burgers will both be available along with the re-release of Epic’s Hop Syndrome Lager. In addition to the beer and food, we’ll have a drawing for some pretty Epic prizes – no purchase necessary.

Is this American Craft Beer Week or Epic Self Promotion Week? Curious about the Red Rock/Epic colab. Cask would indicate draft beer, 4.0 ABV or less. Dave Cole says he doesn't drink "that stuff" and neither should we. Should I just say no to that one?

The Bayou is doing it on a Monday...start thinking of good excuses for missing work on Tuesday.

It's amazing what a brewery can put together by just making contact with bars in town and asking. Pretty much guarantee that the Beerhive and Bayou were not approached by any other breweries to do events.

Glad to see a brewery step up for Craft Beer Week. Unfortunately I won't be in town next week to enjoy it.

Craft beer week is a country-wide (worldwide?) thing. The great beer cities like San Fran, Denver, Portland, Seattle etc. have loads of events. Glad to see Epic doing some things and the collaboration with Red Rock sounds cool. I see Desert Edge is also have an event.