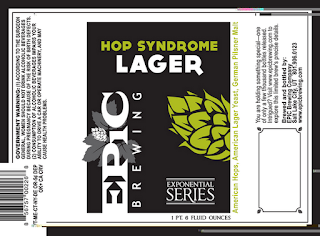 Hop Syndrome is not a new beer, but Epic's latest version has a new quality that makes it unique from it's predecessor versions. Aramis.

Aramis a new hop variety from the Alsace region of  France that has been rarely used in the states. Epic used five pounds per 10 barrel batch of whole leaf Aramis in the hopback to impart an earthy, light lemon aroma to the bright tropical flavors of the calypso hops to make Hop Syndrome an even better summer lager.

Available now at the brewery and where Epic's Exponential series is sold.

Anybody try this new one yet? I'm really getting into lagers, and this is a good one.

It's herbal & grassy like most noble hopped lagers but it has hints of sweet citrus and lemon. The abv has been dropped down a notch or two, making it a bit more quaffable in the hot weather. I killed at least two bottles on Friday.

Mikey described it well. I did get peppery notes as well. Nice easy drinking lager.

i got a lot of black pepper and lemon (must be the aramis) on top of the sort of sweet-tart tropical flavor familiar from last years (from the calypso i think). my new favorite summer lager by far